Slam Jammin' Sonic[1] was a planned one-shot intended as a spin-off of the Sonic the Hedgehog comic series published by Archie Comics, and a crossover between Sega and the National Basketball Association featuring the Seattle SuperSonics and the Boston Celtics. The one-shot was pitched during the "early days" of the series by Ken Penders and Mike Kanterovich, but never went forwards due to lack of direction.

In an attempt to combat the forces of Dr. Robotnik, Rotor Walrus creates an experimental transporter which Sonic volunteers to test out. However, the experiment goes awry due to a passing electrical storm, and instead of being teleported to the center of Robotropolis, Sonic is tossed into the middle of a National Basketball Association championship game between the Seattle SuperSonics and the Boston Celtics on an alternate Earth. Sonic helps the Seattle SuperSonics win the game, and is subsequently approached by a scientist who is curious about his origins. After hearing his story, the scientist manages to transport Sonic back to the Prime Zone, much to the relief of Rotor. Despite the anomaly, Sonic encourages Rotor to continue with his research while adding safeguards to prevent similar situations from occurring.[2] 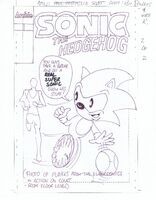 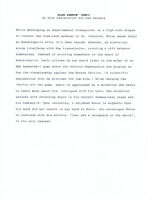