For the Town Stage on the same continent, see Empire City.

Skyscraper Scamper, from the Xbox 360/PlayStation 3 version of Sonic Unleashed.

An urban metropolis in Empire City.

Skyscraper Scamper (スカイスクレイパー・スキャンパー, Sukaisukureipā Sukyanpā?) the sixth or seventh Action Stage in the Xbox 360/PlayStation 3 version of Sonic Unleashed, depending on the order of previous Action Stages. The area takes place up amongst the skyscrapers of a modern metropolis and along the highways that wind between them. It is specifically located in the middle of Empire City.

During the events of the game, Sonic the Hedgehog and Chip came here to keep Badniks and Dark Gaia's Minions from overrunning the city.

Skyscraper Scamper is based off the real-life city of New York and borrows features from other cities in the United States. Located in the heart of the modern, high-rising metropolis of Empire City, Skyscraper Scamper takes place high above ground. Countless towering skyscrapers breach the cloud cover and fog up the horizon like a dense forest. Each building is different in appearance, ranging from towers with spires, to lower buildings with flat rooftops and spherical water tanks. Between the buildings are elevated highways and roads that crisscross between each other (those in the background also have cars on them). Additionally, there are tunnels resembling the Lincoln Tunnel that the roads lead through.

Despite its urbanized theme, Skyscraper Scamper has some flora in the form of trees, bushes and patches of grass planted on the flat rooftops. Noticeable structures found here include suspension bridges resembling the George Washington Bridge and Verrazano Bridge, and skyscrapers resembling the Chrysler Building.

During gameplay, in both the daytime and nighttime acts of Skyscraper Scamper, the player has to use narrow and enclosed platforms which limits Sonic's movements. At the same time, bottomless pits are a near-constant threat. There are also many moving platforms which are necessary to advance through the acts.

In the daytime acts, the player relies on crossing gabs with either Grind Rails or Homing Attacks. To leap between buildings, Ramps and the Light Speed Dash are also often utilized. In the nighttime act, the player often uses ledges and platforms. The nighttime act also makes heavy use of the balance beam gimmicks which are often lined with spikes on the sides so they cannot be grabbed. Sometimes, they can even crumble over bottomless pits. There are also several electrical beams that the player must bypass by destroying machines, flicking Switches or by proceeding past them with caution.

This act takes place across the majority of Skyscraper Scamper. In the beginning of the act, the player start out by running down a highway segment with curving roadways, using Grind Rails, Springs, Ramps and the Light Speed Dash to cross the present gabs in the road. At the end of this section, the player will enter a tunnel that will take him/her to the rooftops. There, the player has to get across bottomless pits using small and narrow platforms, with the choice of multiple paths. After crossing a few rooftops, the player will enter another road section that is played in 2.5D before arriving at the buildings once more. From there, the player lands on a large suspension bridge, where he/she will face the Interceptor and then following a group of Aero-Chasers. After leaving the bridge, the player will enter a grinding section on multiple grind rails above a bottomless pit, where the player can either move between the buildings or run across them. At the end of the act, the player then has to defeat a group of Egg Fighters to make the Goal Ring appear. It is in this act that Sonic and Chip are clearing out the invading Badniks

This act takes place amongst the rooftops of the vast skyscrapers. Here, the player has to run down a series of extremely narrow beams, located above bottomless pits, that connect different rooftops while fighting enemies, utilizing the Light Speed Dash and avoiding obstacles such as spikes and flying hammers. On the final bar section, the player has to get across bar that can suddenly shift to the ring and left, with the Quick Step being a recommended maneuver here.

This act primarily takes place on the rooftops of the skyscrapers. Here, the player first has to advance to the next rooftop climbing ledges. Once arriving on the side of the first skyscraper, the player has to destroy a generator to allow usage of the swinging poles to the next ledge segment. After leaving the ledge section, the player has to encircle a series of beams and rooftop platforms to reach the switch that will deactivate a barrier blocking the player's path. Following that, the player has to reach another separate rooftop and defeat a Titan to get a Key Stone for a pedestal that will unlock another platform, which will take the player further down the act. Shortly after, the player will arrive in a maze-like section where he/she has to destroy another generator to lower a barrier blocking the path. From there, the player will arrive at a rooftop where he/she has to solve a puzzle involving shutting down electrical beams and then activating a series of switches to unlock the path to the end of the act. There, the player then has to defeat another Titan to unlock the entrance to the Goal Ring. It is in this act that Sonic and Chip are clearing out the invasion of Dark Gaia's Minions.

The downloadable content pack for the Xbox 360/PlayStation 3 version of Sonic Unleashed, the "Empire City and Adabat Adventure Pack", introduced two additional daytime acts and nighttime acts for Skyscraper Scamper to the game. These acts are basically extensions of the original acts in the game, but are much more difficult to complete. The pack was released on Xbox Live for $4.13 and on the PlayStation Network for $3.00 on 11 June 2009.

This act is basically the same as the daytime Act 1 in the game, except the act has been modified, having been given a generally harder layout with more gimmicks, more enemies and more hazardous and abundant obstacles, such as spikes and bombs.

This act mainly takes place on a very long highway amongst the skyscrapers. Here, the player races down the highway while having to avoid hazardous obstacles such as spikes and bombs. After getting to another highway through a series of Dash Rings, the player will be confronted by a group of Aero-Chasers and then the Interceptor. Curiously, during the Interceptor segment, the camera pans from a high location above Sonic. After facing the Interceptor, the player will arrive on a rooftop, where he/she has to defeat some enemies to make the Goal Ring appear.

This act takes place on the nearby rooftops of the nighttime Act 1. Here, the player has to cross electrified spiked beams in a tightrope walking fashion and use Dark Bats, Dark Bat Snipers and Thunder Bats to cross over bottomless pits. At the beginning of the act, the player has to defeat a wave of enemies, before climbing to the other side of the building and defeat a Titan. From there, the player returns to the starting point and proceeds through a now-unlocked path, advancing across a series of rooftop platforms and electrical beams. Eventually, the player arrives in a section filled the Dark Bat variant of Dark Gaia's Minions, where the player has to use the enemies to reach and activate a switch to proceed, and then climb use the enemies to ascend higher. From there, the player will arrive at another rooftop, where he/she has to defeat series of enemies and then a Titan on the other side, to reach the Goal Ring.

Nearly all Acts in Skyscraper Scamper contain a number of collectibles the player can obtain when playing through them: 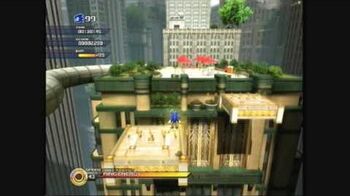 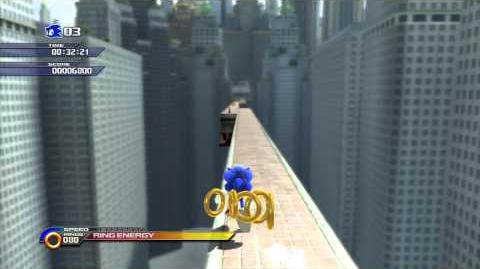 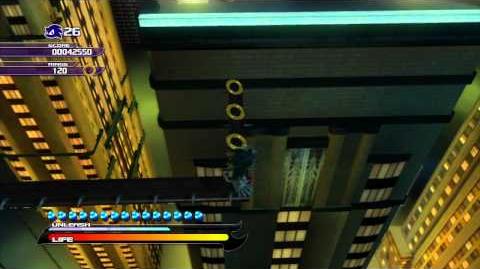