Shadow in Sky Troops, from Shadow the Hedgehog.

A heated, mid-air battle between the forces of the Black Arms and the Eggman Empire.

I bet no one expected this baby could fly.

Sky Troops is one of the fourth Stages in Shadow the Hedgehog. It is reached by completing the Hero mission of Cryptic Castle, the Normal mission of Prison Island, or the Dark mission of Circus Park.

Sky Troops takes place high in the sky, across the now-flying ruins of Glyphic Canyon, where the Black Arms are in the middle of a large-scale clash with the Eggman Fleet. Many of the areas are separated by floating platforms, and Cell Cannons can be found throughout.

Dr. Eggman laments about how the conflict between the Black Arms, Shadow the Hedgehog, and G.U.N. is destroying key locations he plans to capture, before sending his fleet to counter the alien threat. The game then sees Black Doom reveal to Shadow that the ruins in Glyphic Canyon were a massive flying fortress that he brought to Earth thousands of years prior. Black Doom then tasks Shadow with taking out the Eggman Fleet using Cell Cannons, while Dr. Eggman tells Shadow to destroy the temple jewels keeping the ruins in the air. The Normal path sees Shadow headed for the Goal Ring at the end of the stage, like most other stages in the game.

The following weapons can be found in Sky Troops:

The Secret Door can be found directly ahead of the sixth Save Point, with a Black Volt and a Worm Shooter being found behind it. Shadow can tame the creature and ride it through the rest of the Stage. The weapon makes it easier to collect Item Boxes along the way.

The Black Barrel turrets and battleship targets are the weak points that the player should aim for. These will always be in the same area, even if the player skips one and goes back later.

The first of Eggman's ships is located just after the first Save Point. This is an easy target, and should serve as a tutorial of sorts on how to use the Cell Cannon. After the fourth Save Point, take the lower path to reach the third battleship. This one is the easiest for you to get hit. After defeating the third battleship, there will be a line of Rings above a Jump Panel. Use the Light Dash to reach the fourth Cell Cannon and the fourth battleship. The final battle ship is equipped with eight turrets: three on each side and two in the middle. Take out the center turrets first, otherwise the battle will be much more difficult.

If unlocked, the Shadow Rifle can greatly speed up this mission.

In Sky Troops' Expert Mode, the player will have to use the Light Dash here a bit more than they used it on the Normal Story Mode. One thing to take note of is that after the long Light Dashing section, the player must hold forward in order to land safely on the solid ground. 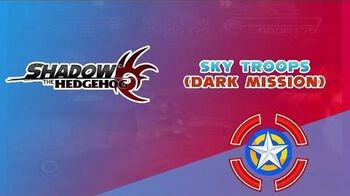 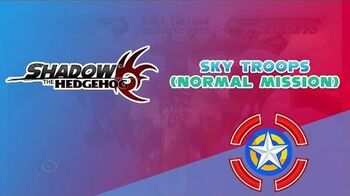 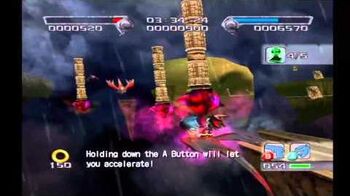 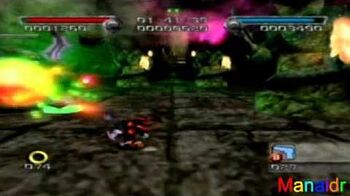