Ancient ruins located in the sky.

Above/In front of the Floating Island

Take the battle to the clouds when Sonic fights Robotnik's Badniks on the floating ruins of an ancient time!

Sky Sanctuary Zone[1] (スカイサンクチュアリー ゾーン[2], Sukai Sankuchuarī Zōn?), also known as the Sky Palace,[3] is the sixth overall Zone of Sonic & Knuckles and the twelfth of Sonic the Hedgehog 3 & Knuckles. It is an ancient ruin scattered throughout the sky above Angel Island. It is considered to be sacred ground which is forbidden for anyone except Knuckles the Echidna to enter or walk on.[3]

Sky Sanctuary is composed mostly of pillars and towers that appear to bear some type of Roman or Gothic-style architecture. The Zone features sparse bridges and beams connecting them. Only the tops of the towers are ever seen, as the Zone takes place towering above a thick sheet of clouds, but the whole of the sanctuary is believed to float in a manner similar to Angel Island. The stone pillars are all a weathered yellow in color, and vines grow unrestrained everywhere.

In Knuckles' story, the Zone overlooks Angel Island, floating far away amongst the clouds. All that is seen of the Zone is a dull, flat arena where Knuckles faces Mecha Sonic Mk. II. The Master Emerald sits near the right of the arena. Also, in Knuckles' version of the Sky Sanctuary Zone, Angel Island continually descends in the background as the player spends more time in the Zone. At ten minutes, which is the normal time limit for the Zone, Angel Island disappears under Sky Sanctuary Zone.

Having arriving in Sky Sanctuary Zone via a Warp Point, Sonic and Tails are subsequently forced to jump from platform to platform, climbing up the Zone and chasing the ascending Death Egg before it rises too high into orbit. Knuckles briefly helps Sonic and Tails by activating a bridge in the Sky Sanctuary Zone, but he is not able to continue any further due to exhaustion from the events in Hidden Palace Zone. Along the way, Sonic and Tails are also forced to battle numerous Eggrobos. At various points of the Zone however, Sonic is forced to fight Mecha Sonic Mk. II. After the series of battles however, Sonic defeats Mecha Sonic Mk. II. Following their final battle, Sonic and Tails run up a corkscrew ramp to the top of a tall floating landmass that literally crumbles and falls beneath them, then leaps aboard the Death Egg.

Having arrived in Sky Sanctuary Zone via a Warp Point, Knuckles finds himself looking for the Eggrobo he has been chasing all over the Floating Island. Immediately after however, said Eggrobo appears in an Egg Mobile with a hook claw attached to it. Knuckles tries to get away, but is grabbed by the Eggrobo with its Egg Mobile's hook claw. Knuckles is then carried before Mecha Sonic Mk. II, who is revealed to have stolen the Master Emerald, meaning that it is only a matter of time before the Floating Island falls down from the sky. As Mecha Sonic Mk. II moves in and gets ready to finish Knuckles off with a Spin Dash though, Knuckles breaks free from the Egg Mobile's claw in the last second and glides away while Mecha Sonic Mk. II rams into the Egg Mobile, destroying it and the Eggrobo. Afterward, Knuckles begins his fight with Mecha Sonic.

At Knuckles brings Mecha Sonic Mk. II on the verge of defeat, the robot retreats and uses the Master Emerald to enter its Super State. With his opponent stronger than ever, Knuckles is forced into a race against time to get the Master Emerald before the Floating Island falls into the sea, which is visible to him in the distance. After Knuckles defeats Mecha Sonic Mk. II though, it detonates with a large explosion, initiating a cascade effect that destroys any remainder of the Zone; Knuckles barely escapes unscathed thanks to a timely assist from Sonic and the Tornado.

If Knuckles has all of the Chaos Emeralds, he also manages to salvage the Master Emerald from the chaos; as he and Sonic fly back to Angel Island, they rightfully deposit the sacred gem back into its home island, causing the Floating Island to flash and rise higher into the sky. If Knuckles does not have all of the Chaos Emeralds, the Master Emerald is left behind while a tired Knuckles is escorted away as Floating Island falls into the sea below. After the credits, Mecha Sonic Mk. II is then shown to have the Master Emerald in its possession.

While there are very few features to note about in Knuckles' version of Sky Sanctuary Zone due to its very small size, Sonic's version of the Zone is a very tall Zone split into a few sections. There are Pole Elevators that the player can grab onto and then jump off to reach higher places. The player can also jump on Clouds which will flip the player into the air. There are also spinning platforms that revolve the characters around. Warp Points appear as well throughout the Zone, which transport the player vertically upwards to the higher sections of the Zone.

The floating gray stone pillars serving as mid-air platforms crumble as soon as the player steps on them. There are also small black platforms with spikes beneath that swing along a fixed arc. The player can jump on them, remaining in their Spin Attack form as they ride them and can jump off of at any time or wait to dash right off of them as soon as the swinging platform touches the ground. It is also possible to be crushed by them. There are also yellow grass paths that crumble shortly after the player runs on them.

This Act is exclusive to Sonic's storyline. However, note that, in Sonic the Hedgehog 3 & Knuckles, playing as Tails will initiate Sonic's version of the Act. Sonic's version of the Zone acts like just about any other Zone Sonic has passed through, with only one Act to clear. Many pitfalls and the danger of falling down to a lower elevation, as well as the threat of Time Overs, are present in this Zone. Spikes and one type of Badnik are the obstacles Sonic (and Tails) must overcome, with the occasional threat of being crushed by moving spikes or rotating spike platforms.

After making it to various sections of Sky Sanctuary Zone, Sonic is forced to fight Mecha Sonic Mk. II, in three separate boss battles. At first, Mecha Sonic Mk. II pilots the Egg Wrecker, then the Egg Bouncer, and in the third battle, it attacks on foot without assistance, proving itself a dangerous enemy in its own right. After winning this last fight against the robot, Mecha Sonic's unresponsive body is seen falling along with the crumbling ground, while Sonic (and Tails) proceeds upwards into the Death Egg hovering above.

As Knuckles, this is the final Act of his story, and consists of boss fights against Mecha Sonic Mk. II and Super Mecha Sonic Mk. II. The Act is very small; it consists of three flat, bounded sections; the first for the initial cutscene with EggRobo and the remaining two for each of the boss fights. The first section contains only three Rings above the Warp Point that Knuckles emerges from which he collects automatically to help him survive through both fights. The trigger for the first Mecha Sonic fight occurs immediately right as Knuckles emerges from the Warp Point, where EggRobo appears to pick up Knuckles, the first boss fight against Mecha Sonic following after this. After winning the first Mecha Sonic fight, the Zone will transition him into the furthest section of the Act where the Master Emerald can be seen for the second Mecha Sonic boss fight. 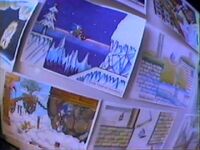 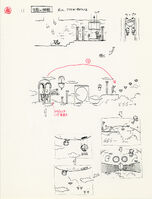 Concept artwork of the Zone's map, along with Hidden Palace Zone's cutscene. Taken from Sonic Origins.