Sky Sanctuary, from the console/PC version of Sonic Generations.

A series of floating ancient ruins.

Sky Sanctuary (スカイサンクチュアリ, Sukaisankuchuari?) is the third Stage in the console/PC version of Sonic Generations. It is a reimagination of Sky Sanctuary Zone from Sonic & Knuckles, representing said game in the Classic era.

Modeled after the original stage, Sky Sanctuary consists of a series of floating ancient ruins in a clean, light blue sky with few rather large clouds. The aforementioned ruins are made of white marble and are covered by many kinds of vegetation, such as mosses and palm tress. There are also some bridges with floors that are made of glass with technological patterns on them. Also, in the background at the end of both Acts of Sky Sanctuary, the Death Egg can be seen.

A version of Sky Sanctuary from somewhere in spacetime got transported to White Space where it was drained of color and life. This would be the third area Classic and Modern Sonic pay a visit to after ending up in White Space. By speeding through Sky Sanctuary, the Sonics are able to fix space, thereby restoring Sky Sanctuary and, by extension, Knuckles, from the lifeless states they had been put in by the Time Eater.

Sky Sanctuary is a very open stage. Unlike the original Sky Sanctuary Zone, this stage comes with various alternate paths to take.

Sky Sanctuary Act 1 incorporates most of the elements from the original Sky Sanctuary Zone, including Pole Elevators, clouds, spinning platforms, and Warp Points. Other gimmicks are added as well, such as the Spinning Tops from Sonic the Hedgehog 3, and black blocks that become visible and tangible once Classic Sonic presses a switch.

As Classic Sonic, the player must first run through numerous ancient floating buildings in Sky Sanctuary. Eventually, almost at the end of the Act, the player will have to run up a collapsing path that will lead to the Goal Plate.

The 3D section of this Act is similar to Act 1. The player must speed their way through numerous ancient floating buildings. Similar to Act 1, Sonic must run up a collapsing path that will lead to the Goal Ring. 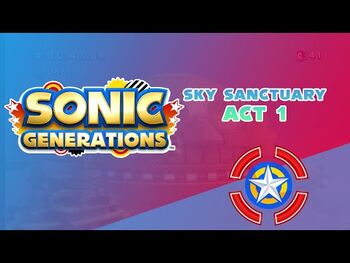 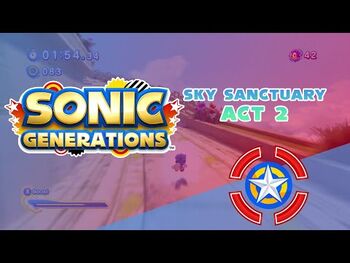