Shadow in Sky Rail, from the 2012 remaster of Sonic Adventure 2.

A set of Rails and platforms suspended high in the sky.

This stage is similar to Pumpkin Hill but is set at daytime, with no Boos or trains circling the stage.

Shadow must find and chase down Tails in the Cyclone before he gets too far.

There are many Rails to grind on in this stage, as well as a multitude of Propeller Springs. There is also a large area in this stage where it is rather difficult to see.

To quickly complete this mission, the player should head straight down the main path and pop the Item Box accessible via the first Propeller Spring along the way. They must proceed forward until Shadow reaches a ledge with two adjacent Rails and a Point Marker. The player should grind down these Rails to reach a cliff with another pair of Rails on the top, then proceed down the incoming extensive Rail section which leads to a single Spring stuck to a mountain. Here, instead of using the Spring, the player should navigate around the mountain by jumping down to the ledge below the Spring, where the second Chao Container is located. The player may have to perform a Homing Attack during the descent to reach this ledge. Here, there are two Item Boxes containing a total of thirty Rings. The player should climb back up the mountain and take the right Rail after crossing the second Point Marker.

The player should play the Mystic Melody at the Ancient Ruin to the left of the second Point Marker, and a path of Rings will appear. The player must Light Speed Dash across them and use a series of Propeller Springs to reach the top of the hill, where the lost Chao is.

If the player crouches while grinding down the Rails and ignores any enemies that are not on the path, completing this stage in less than two minutes should be easy.

This mission places iron balls on many of the Rails. To get by them, the player must use the Grind Step.

The Level Up Item in Sky Canyon is Shadow's Ancient Light. This allows him to use the Light Speed Attack.

Not far from the start of the stage, the player can see a Chao Container. By walking off the left edge of the platform, some Mono Beetles will appear, and the player can use the Homing Attack to reach a Spring Beetle; the Ancient Light is found on the platform directly overhead.

As soon as the player begins this stage, they will be grinding down a Rail. When the player looks to the right side of the mountain, they can see some sort of steel device with a wheel at the end emerging from the mountain. Big's head can be seen where the device and the mountain come together.

In the Sonic the Hedgehog comic series and its spin-offs published by Archie Comics, Sky Rail appeared as Sky Rail Zone, specifically in the "After-The-Credits" scene from Sonic Universe #62. Sky Rail Zone retains the same appearance as its game counterpart. 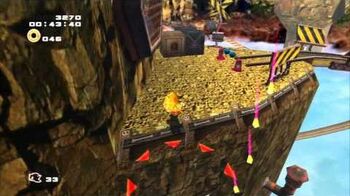 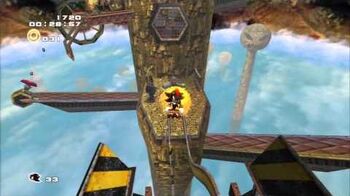 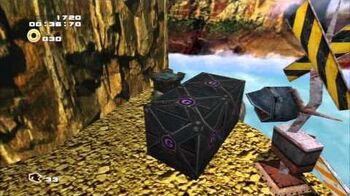 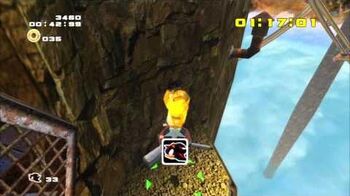 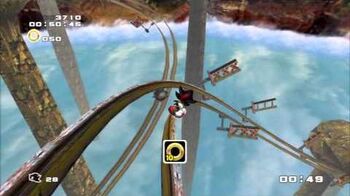