This rollercoaster gone wild comes complete with twists, turns, loops, drops and even stuffed teddy bears, designed to slow you down. Use springs, dash panels and the strongman platform to propel your character through the atmosphere while staying one speed boost ahead of the competition.

Sky Park Zone is the third Zone in Sonic Rivals. It is a carnival-style level located on Onyx Island; a future version of Angel Island brought to the present by Eggman Nega. The player must race against Metal Sonic in the second act in order to get through the Stage.

This Stage specifically takes place at night and gives a clear view of the stars and large full moon in the background and has several light chains and neon "Eggman" signs which light up the course.

The game gimmick of this level features red stuffed bears on the prize displays which will jump out and latch onto the player character, thus slowing them down and other Carnival attractions that help the characters advance to the goal. There are roller-coasters that race along the track serving as obstacles; the player must be cautious if he/she chooses to take the lower paths. There are jack-in-the-box gimmicks that must be pushed to fill a gap but if the player jumps on the top surface of the box, he/she will be launched high into the air as it were a spring.

After defeating Egg Falcon, Shadow receives another call from Rouge who is about to reveal something important about the "Dr. Eggman" (which is really Eggman Nega) Shadow had been chasing, but is suddenly interrupted and is cut out. As Shadow wonders what is going on, he is suddenly warped to Sky Park Zone. There he meets Sonic, who had just been fighting Silver, but then got teleported to this place by Silver himself. Shadow however intends to find Dr. Eggman and save Rouge and Sonic challenges Shadow to see who find him first.

Sonic eventually reaches "Dr. Eggman" first and wants to know his plan, but the doctor instead makes Sonic fight his metallic counterpart, Metal Sonic. Shadow later reaches Dr. Eggman himself and demands to know what he had done to Rouge. The doctor reveals he had turned Rouge into a card and sends Metal Sonic up against Shadow.

Knuckles, having just defeated the Egg Falcon, demands "Dr. Eggman" to give back the card containing the Master Emerald, but the disguised Eggman Nega uses it to teleport him to Sky Park Zone. As he looks around, he meets Silver, who had been following "Dr. Eggman" since he teleported Sonic away. Silver asks Knuckles if "Dr. Eggman" had something weird on him and Knuckles answers that he had a strange camera that lets the doctor turn things into cards, but then asks Silver who he is. Silver however, recognizes the camera and tries to leave, but Knuckles races after him to get some answers.

When Knuckles reaches "Dr. Eggman" he wants to know how the doctor stole the Master Emerald from Angel Island and the doctor reveals that Onyx Island is Angel Island, much to Knuckles' confusion and puts Metal Sonic against Knuckles. When Silver reaches "Dr. Eggman" Silver wants to know how he got a hold of that camera, which such technology should only exist in the future, but the doctor says he has to defeat his Metal Sonic first if he wants an answer. 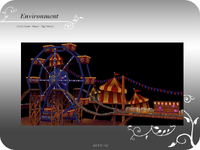 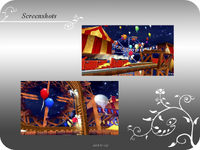 Shots of Sky Park Zone. By Mabel Chan.
Add a photo to this gallery