The Sky Hawk[1] is a robot deployed by the military organization Guardian Units of Nations in Sonic Adventure 2, and a part of the Hawk series.

The Sky Hawk is nearly identical to a Gun Hawk in appearance, and has twin engines that face forward.

Although the Sky Hawk is unarmed, it is usually found hovering high above, and will ram toward the player once it sees them. It systematically changes its twin engines' configuration for either movement and attempts to hurt the player with its spikes. Upon destruction, it awards the player two hundred points.

A Sky Hawk in Wild Canyon. 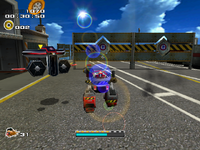 A Sky Hawk in Weapons Bed.
Add a photo to this gallery