Sonic in Sky Chase Zone, from Sonic the Hedgehog 2.

Sonic and Tails pursue Robotnik with the Tornado through the skies.

Robotnik has escaped to the sky! Sonic's a wing walker (and "Tails" is his pilot!) in a perilous battle above the clouds!

Sky Chase Zone takes place in the skies, with a light blue background, a few thin clouds, and enormous clouds both at the top and the bottom.

After freeing West Side Island from Dr. Robotnik's rule for good,[3] Sonic and Tails give chase to the doctor in the Tornado. On the way, they find various hordes of Badniks which they overcome. At the end, the duo finds Robotnik's fortress, the Wing Fortress.

In Sky Chase Zone, the Zone is constantly moving forward via auto scrolling. The player (Sonic or Tails) will be standing on top of the wings of the Tornado, giving the player very little space to stand on. The secondary character will be in the cockpit, flying the plane. The player will have to fight the airborne Badniks as they move towards. The player is able to move Tornado the same way as the playable character, while also being able to Spin Jump and Spin Dash. Pressing up or down on

This Zone does not have any items or obstacles except Rings and Badniks. This level scrolls to the right automatically, so it is possible for Sonic/Tails to get stuck between the left side of the screen and another Badnik if the player isn't fast enough. The player has to avoid getting hit by fast moving Balkirys, avoid both Nebulas and Turtloids' projectiles. After destroying smaller types, the player can also stand on larger Turtloids to get better place to move.

Due the auto scrolling, it takes at least two minutes and six seconds to complete the Zone. Sonic and Tails move off the screen as progressing to the next Zone. 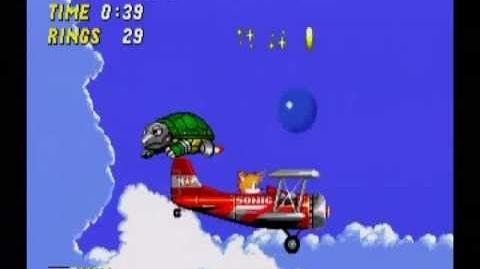