On a floating landmass

Sky Canyon is the fifth Zone of Sonic Advance 2.

Sky Canyon is set high above the clouds and contains swirling fans that blow the playable character around. The stage resembles Windy Valley in Sonic Adventure.

While pursing Dr. Eggman, Sonic stumbles into Knuckles who is the pilot behind a deadly new contraption. After Sonic destroyed it, Knuckles tries to defend himself much to Sonic's annoyance, who scolded the gullible echidna for allowing himself to to be duped by the doctor once again before taking off to continue his adventure. Knuckles then swears revenge on Eggman for tricking him.

Sky Canyon contains bouncing platforms and narrow pathways that save the player from the many bottomless pits that appear frequently throughout the course.

The boss of Sky Canyon is the Egg Saucer, which is piloted by Knuckles the Echidna when playing as Sonic for the first time (though it is possible that Knuckles was actually trapped inside, as he does appear to be attempting to smash the glass free with his fists). After beating Knuckles, it was revealed that Eggman tricked the echidna once again and Knuckles swears revenge on the doctor for tricking him and Knuckles is then playable. After beating Knuckles, if Sonic or any other character returns to the stage, the Egg Saucer is piloted by Eggman. 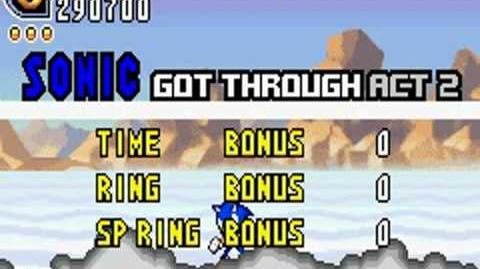