I've got more sizzle than a rasher of bacon. I'm hungry, and it ain't meals on wheels I'm after - it's you.

Skweel is the sixth competitor in Dr. Robotnik's Mean Bean Machine. He is a Badnik and a literal road hog, as he is part-swine, but with wheels rather than legs.

Skweel also appears in Adventures of Sonic the Hedgehog, in the episode "Super Special Sonic Search and Smash Squad". In this episode, he is tricked by Sonic into falling off a cliff, along with Dynamight and Frankly. 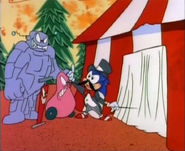 Skweel in Dr. Robotnik's Mean Bean Machine.
Add a photo to this gallery