Sonic News Network
Register
Don't have an account?
Sign In
Advertisement
in: Sonic and the Black Knight bosses

A swordfight against Sir Lancelot. For his boss, the player controls Sonic.

Sir Lancelot is the third boss in Sonic and the Black Knight and is fought with Sonic the Hedgehog. He can first be fought after clearing the "Reach the Lady of the Lake" mission in Deep Woods, and again, as an optional boss, after beating the Dark Queen.

Begin the battle with guarding after Sir Lancelot has reached Sonic. After that, when he has finished attacking, do a barrage of quick sword slashes and especially in the air, which will cause him to lose his steady, until his defeat. The player can also end the battle easily after guarding by a quick Soul Surge slashes.

This fight is more difficult than the first one. Sir Lancelot is now armed with chaos powers, namely Chaos Spear and Chaos Blast and the battle progressively gets harder the more times Lancelot is hit. Start the battle with a full jump and do some some quick slashes in the air, thus blocking his attacks and damaging him rapidly. After blocking his attacks, get out of his way so he does not use the Chaos Blast and repeat the strategy. Sometimes, Sir Lancelot will do also instant warp to Sonic when the player is far away.

When he begins to move his hands together (mostly when the player is nearing him), stop and get out as he is aiming to do Chaos Blast. If the player has energy in the Soul Gauge, wait until he begins to lower his shield, and before he do, perform perfect Soul Surges to block and attack. Sometimes, if Sonic is far from Sir Lancelot or after performing Chaos Blast, he will do a forward sword slash toward the player or use Chaos Spears, either one by one from his hand or in barrages suspended in the air. When he is using his Chaos Spears, he is vulnerable, so avoid his spears and attack him with either Soul Surge or simple sword slashes. If the player has large amounts of Soul Energy, then Sonic can take distances from him. This way, he will use Chaos Control, which is the player's best way to use the Soul Surge on him to cause damage while taking into account his Chaos Blast attack. In addition, the player can also jump back and move down in at increased speed to attack him easily. After having done these tips successfully, Sir Lancelot is defeated. 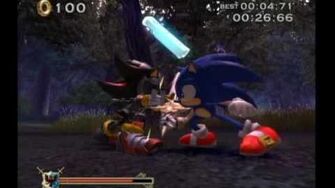 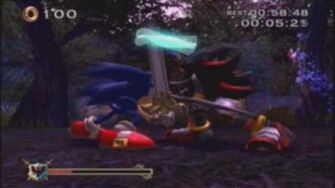 "Now we shall see what you can do."
—When beginning the battle

"Knave the Hedgehog, eh? A fitting name, I'd say."
—During battle

"You're going to have to do better than that to defeat me."
—During battle

"''Behold my ultimate power!"
—When beginning the battle

"Are you truly a knight? You seem more like a court jester."
—Lancelot after hitting Sonic once.

"You have been a worthy adversary, but I am afraid it's over now."
—Lancelot after hitting him enough times.

"Such sloppy sword work. You should be ashamed of yourself."
—Lancelot after hitting Sonic twice.

"I thought I was the ultimate knight..."
—After being defeated