Sonic and the Black Knight (Only appearance)

Sir Lamorak (ラモラック, Ramorakku?) is a character in Sonic and the Black Knight. He is an anthropomorphic hawk and the alternate reality doppelgänger of Jet the Hawk from the world of Camelot. He is also a member of the Knights of the Round Table.

Lamorak is available in two-player mode, but not in the main story of the game, along with Sir Galahad. He is unlocked by getting five stars on the mission "Beat the Clock" in Great Megalith.

Lamorak has a great deal of pride and holds utter faith in his speed. He harries his enemies with his beloved twin swords. 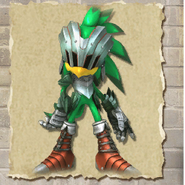 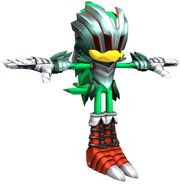 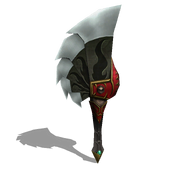 Sir Lamorak's sword.
Add a photo to this gallery

Add a photo to this gallery
Sonic and the Black Knight
Main article | Gallery | Script | Staff | Glitches
Retrieved from "https://sonic.fandom.com/wiki/Sir_Lamorak?oldid=2213782"
Community content is available under CC-BY-SA unless otherwise noted.