Milord is troubled by thy success, Sire. But thou art destined to proceed no further. Prepare to duel Lord Robotnik's champion.

Sir Ffuzzy-Logik is a Badnik and the tenth competitor in Dr. Robotnik's Mean Bean Machine. He speaks in an old English accent, wears an orange fur cape and carries a trident. He seems to have a small rivalry with Dragon Breath.

In episode one of Adventures of Sonic the Hedgehog, "Super Special Sonic Search & Smash Squad", he can be seen chasing Sonic along with other robots shouting "We got him!". 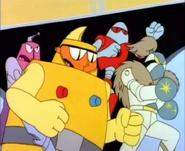