Sinbad the Sailor, from Sonic and the Secret Rings.

I am Sinbad of the Seven Seas, Adventurer of Adventurers!

— Sinbad the Sailor, Sonic and the Secret Rings

Sinbad the Sailor (シンドバット, Shindobatto?) is a character that appears in Sonic and the Secret Rings. He is an anthropomorphic echidna and the alternate reality doppelgänger of Knuckles the Echidna from the world of the Arabian Nights. He is renowned throughout his world as a legendary adventurer.

Sinbad and Sonic first met when Ali Baba recommended to seek him out for his advice on how to deal with the Ifrit. At that point, Sinbad had been engaged in a battle with pirates when he was kidnapped by the Rukh, most likely under the orders of Erazor Djinn. Sonic and Shahra then set off to find him.

The duo soon find him held in a cage aboard one of the Rukh, where he understandably requests that he be freed before he shares his advice with them. Sonic soon frees him and Sinbad provides the somewhat obvious suggestion of defeating the fire genie by dousing him with water. He proves he is still just as stubborn as Knuckles when he started to fight with Sonic when the hedgehog insulted his suggestion. After their argument is broken up by Ali Baba, Sinbad elaborates that he meant recovering the Water World Rings he had stolen from the pirates and using that to produce the water needed to extinguish and defeat the Ifrit.

After Sonic had defeated the Erazor Djinn, Sinbad aided him and Ali Baba during Sonic's following adventures as he searched for a way back to his own world.

Much like Knuckles, Sinbad is aggressive, stubborn, gruff and somewhat antisocial. Likening life to a game of give and take, he is willing to help others out, but only if they do something for him in return. By comparison, Sinbad comes off as a bit smarter than Knuckles, but according to Sonic, that is not saying much.[1] 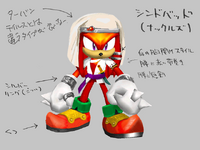