The rival battle stage is set upon a seemingly endless highway road in Crisis City, with Silver flying in front of Sonic. The road is primarily a 3D auto-running stage where the player can perform the Quick Step, though it will transition to a 2D side-scrolling perspective in some of Silver's attacks. Aside from Rings, the road contains various debris including broken cars, highway signs and terrain bits that will leave Sonic temporarily stunned if he runs into them without using the Hop, Slide Attack or Boost. However, each debris Sonic runs into will fill the Boost Gauge with energy. Silver will attack Sonic with a wide variety of Psychokinetic attacks utilizing these objects:

Once Silver has been hit four times, the stage shifts to a front-view perspective behind Sonic, where Silver uses his final, strongest attack known as the Meteor Smash, which has him gather up various debris objects into a large ball, and launches it along the highway behind Sonic, crushing Sonic if he cannot outrun it. While Sonic runs from the giant ball of rubble, Silver will try to crush Sonic with a large container which will not only damage Sonic but due to slowing down, this puts him at significant risk of getting crushed by the Meteor Smash attack (which will cause the player to instantly lose a life even while having Rings). Sonic must avoid this, while, at the same time, boosting to catch up with Silver and attack him with the Homing Attack, in which successfully doing so causes Silver to fall to the ground and get crushed by his own ball of debris, ending the fight.

In the Nintendo 3DS version of Sonic Generations, Silver continuously teleport to catch up with Sonic if the latter gets away from him. Silver has one way to attack Sonic; which is by throwing numerous Steel Containers with his psychokinesis at him. This, however, only happens if the player is to be in a close distance with him.

Much like the rival bosses before him in this version, this battle is a race to the Goal Ring and Silver runs on the ground in the race rather than flying using his Psychokinesis like in the console/PC version. 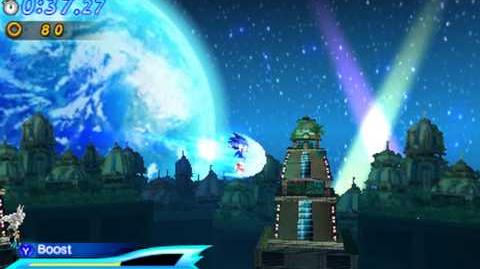