Silver Sonic is an enemy that appears in the Sonic the Hedgehog series. It is alternate version of Silver Sonic from another dimension set in the recent past. Unlike its counterpart, this Silver Sonic is a simple mass-produced Badnik model.

Silver Sonic is a robotic doppelganger of Sonic that possesses an rather low-tech looking appearance. Rather than matching Sonic's size, it is about the same size as Tails. It has metallic grey armor with a yellow color scheme on its center body and mouth plate. Attached with a light blue visor with a red lens and light blue metal sneakers with rocket motors, Silver Sonic's primary weapons include extendable claw arms on both sides of its body.

During battle, the Silver Sonic can utilize two different attacks: it will either attack the playable character with a Spin Dash, or perform a melee attack with its claws by swiping it at the playable characters before dashing forward until it hits the screen's edge. When revving up or performing the Spin Dash though, the player can bounce into Silver Sonic with a Spin Attack or Spin Dash, causing it to ricochet off the walls and damage Metal Sonic if they come into contact. This is the only way one can damage Metal Sonic during this phase. However, in the v1.04 patch released along with Sonic Mania Plus, Silver Sonic, when destroyed, will release four energy orbs in an "X" shape pattern that can also be used to damage Metal Sonic.

Silver Sonic can roll and spin just like the real Sonic with inclusion of being able to perform the Spin Dash. These attacks are strong enough to cancel out the same techniques utilized by Sonic. The rockets on its body also allow it to fly and dash at high speed. Silver Sonic can also attack with retractable claws. 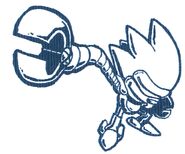