The Silver Boss Attack option in the Episode Select menu.

A DLC level for Silver which requires the player to defeat all the bosses and/or enemies.

Silver Boss Attack is a boss attack stage in Sonic the Hedgehog (2006). It is one of the downloadable levels in the game and was released on 20 March 2007 for Xbox 360 on the Xbox Live Marketplace in all regions,[1] while the PlayStation 3 version was released on the same date in Asia, and in European and PAL regions on 29 November 2007.[2]

The first section of the level is the battle against Iblis in his first phase at the future timeline. The fight here is identical to the regular fight, although three Iblis Biters will spawn in the arena that will likely interfere with the player's progress in defeating Iblis. If an Iblis Biter is defeated, another one will spawn to take its place. It should be noted that the player cannot use Psychokinesis on the Iblis Biters and throw them to damage Iblis. The player moves on to the next section once Iblis is defeated.

The second section of the level is an enemy wave attack, taking place in the same area where Shadow would normally fight Mephiles Phase 2. The arena has been modified with the addition of more platforms, some which enemies may spawn on and some which hold Containers and other objects the player can use Psychokinesis on to attack the enemies. When all objects on a platform have been thrown with Psychokinesis, another set of objects will respawn on that platform to take their place eventually. After a wave of enemies is destroyed, the next group of enemies will spawn. Enemies that spawn here include Iblis Biters, Iblis Takers, Gazers, Golems, Iblis Worms, Stalkers, and Titans. Once all enemies are defeated, the player is able to proceed to the next section.

The next section takes place in Soleanna Castle Town where the player fights against Sonic the Hedgehog. Like the original boss fight, there are no additional enemies. Once Sonic is defeated, the player can move on to the next section.

The next battle is against the Egg-Genesis at White Acropolis. Aside from the enemies that spawn from the Egg-Genesis, there are no new enemies. The Egg-Genesis behaves differently in this level than in the regular boss fight, being able to fire charged laser shots right from the beginning of the battle. Defeating the Egg-Genesis here will allow Silver to progress to the next section.

The next section is an enemy wave attack and it takes place in the same area where Sonic would normally fight his version of the Egg-Cerberus. Much like the previous enemy attack wave section, the arena has been modified to include more platforms, some containing enemy spawn points and some containing objects (such as Containers) that can be used against the enemies with Psychokinesis. The enemies that spawn here are all Dr. Eggman robots, including the Egg Bomber, Egg Buster, Egg Cannon, Egg Chaser, Egg Gunner, Egg Stinger and Egg Sweeper.

The next section is an enemy wave attack that takes place in the future timeline again, in the same area where Shadow would normally fight Mephiles Phase 1. Like before, the arena has been modified with additional platforms with Containers. Again, only Eggman's robots appear as enemies in this section (although with the addition of Egg Walkers and an Egg Keeper). Defeating all enemies here will allow the player to progress to the next section.

In the last section of the level, the player battles against the third phase of Iblis. Unlike the original boss fight, there are two platforms, each with a Titan and a Golem enemy that constantly attacks the player, and Iblis behaves slightly differently, being able to fire more often. Defeating Iblis here will end the level.

The banner of Silver Boss Attack used in the Xbox Live Marketplace. 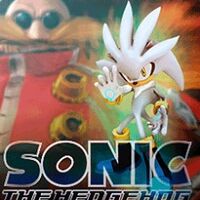 The banner of Silver Boss Attack used in the PlayStation Store.