Deep inside the darkest of woods, Silent Forest offers maze-like caverns, tumbling temples and crocodile-filled swamps to try and stop Sonic the Hedgehog in his path.

Silent Forest (サイレントフォレスト, Sairentoforesuto?) is the fifth world in the Wii U version, PC version and Nintendo 3DS version of Sonic Lost World.

In the Nintendo 3DS version of Sonic Lost World, the player can find Iron Material in the Zones if they finish them successfully.

The first Zone has Sonic traversing tubular planetoids that mostly consist of harmful swamps full of Surprise Crocodiles that will ambush Sonic, and rafflesias that serve as stepping stones. The later parts of the Zone are full of Grind Rails for Sonic to grind along on, providing he watches out for classic Badniks such as Cluckers, Dragonflies and Mushmeanies, as well as Minecarts and more Surprise Crocodiles. The Crimson Eagle also makes a return. The Crimson Wisp and its Color Power, the Crimson Eagle, appear in this zone as well.

Silent Forest Zone 2 takes place in a series of floating ruins above the forest. The music also changes considerably from jungle-like to tango. This zone also features a section for Sonic as a potential ‘stealth’ section in which Sonic has to navigate a zone without being spotted by Zor's robotic owl, using giant non-anthropomorphic owls as cover, and avoiding giant silver Ball Hogs. Being spotted by Zor's owl will result in an instant death. The Magenta Wisp and its Color Power, the Magenta Rhythm, appear in this zone. At the end of the zone, Sonic will have to fight Zor in his robotic owl.

Zone 3 takes place in a frozen tunnel system/cavern, much like the 3rd Zone of Windy Hill. However, the floors of the tunnels are frozen itself, making maneuvering much more difficult, and jumping more dangerous. Dozens of stalagmites and stalactites populate the tunnels (and hidden caverns beneath). When approached, they launch from their current position to the floor (or ceiling), posing a threat to Sonic. Cluckers armed in path-blocking vehicles, and Bombs are littered throughout the area, so even more precision and grace is required to make it out alive. The Cyan Wisp is used in this zone.

This zone takes place at an old ruins. Towards the end of the level, the rooms are dark and the player can only see the silhouettes of Sonic, the enemies and the scenery. While in this state, Sonic will not be able to use Homing Attack to target on enemies. Light switches are scattered throughout this portion of the level and they will turn the lights on for a few seconds. Sonic confronts Zor at the end of the zone. The Yellow Wisp is used in this zone.

This is a giant maze filled with flower cannons and teleportation switches, somewhat similar to the Nintendo 3DS version of Frozen Factory Zone 3. There are two areas of this stage that one must go to before heading to the Capsule. At the beginning, there are three flower cannons, with the left one being accessible. To get to these areas, the player must jump into the flower cannons, which will send him/her to its respective area, skydiving. There are areas that one needs the Gray Wisp to scale up, and switches that only the Gray Quake (which is introduced in this Zone) can activate. Once the player gets through the first area, the player is sent back to the beginning of the stage, but all Rings that may have been collected respawn, and the left flower cannon has closed. However, the right cannon opens, and it sends the player to the second area. After the second area is complete, he/she returns to the beginning, where the center and final flower cannon opens. It sends him/her to the final section, which has the Capsule.

In the Hard Mode version of this course, the second section requires the player to reach the end of every optional passage instead of just clearing one, in order to beat the stage.

This zone is a massive grinding stage, with some land in-between grinding sections. The majority of this stage consists of jumping from rail to rail, trying not to fall off or get hit by Badniks, however, there is a parkour/platforming section. Most of the land sections are cylindrical areas where you need to defeat enough Badniks to progress. Near the end of this stage, there are electric rails that can only be used safely if the player has Invincibility, Super Sonic, a Thunder Shield, or the Ivory Wisp; the latter of which is prominently featured in this zone.

Zone 3 is 2.5D and set in the ruins above the canopies, much like Silent Forest Zone 2 from the Wii U/PC version; its music is also the same, but slightly sped up and including some added timbales. A great deal of this Zone has Sonic grind on Grind Rails and cross disappearing bridges suspended above a massive chasm with few pieces of land between them, with the occasional Spinner that Sonic must attack to reach distant rails, including some electrical ones that will harm him unless he has a Lightning Shield. Most of the pieces of land require the player to defeat Badniks or perform parkour to cross chasms to proceed. In the back half of the level, Zor's owl mech appears in the background and pans its spotlights over the foreground, though unlike the Wii U version, getting spotted will not instantly cost Sonic a life; instead, an alarm will go off, and some extra platforms will fall into the foreground, making certain paths easier or harder to access.

Only available once every Red Star Ring from the three main Zones has been collected. The aesthetics, music, and geometry are recycled from Zone 2, but the level itself has been shortened. Furthermore, large sections of it are covered in spiked balls and extra enemies. In order to progress, Sonic must press a series of switches to unlock the path forward, relying on the Red Burst in order to cross huge gaps, destroying groups of enemies, avoiding water sacks, and refueling by touching flames. 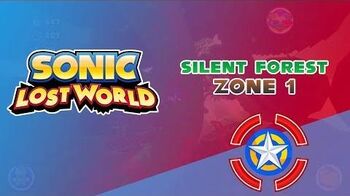