A Shuriken Star, from Sonic Generations.

The Shuriken star,[1] also called the shuriken, is an object that appears in Sonic Heroes and the console/PC version of Sonic Generations. It is one of the main weapons of Espio the Chameleon.

The Shuriken Star closely resembles a hira shuriken/shaken. It is a thin, flat plate of gray metal shaped like a straight, four-pointed star with sharp edges and a hole in the middle. Its size varies between games.

This weapon is very strong, capable of piercing even metal. It can as well be thrown like a Frisbee to damage foes from afar.

In the console/PC version of Sonic Generations, the Shuriken stars appear in the Challenge Act Espio: Master of Camouflage where they are much smaller in size than in Sonic Heroes. They are used by Espio while he is using Ninja Arts: Camouflage.

In this Challenge Act, Espio throw series of small stars at Sonic the Hedgehog which can inflict damage. The more the player progresses with the Act, the harder it becomes to avoid them. When they get near the ground, the Shuriken Stars disappear instantly. 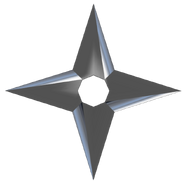 Sonic Heroes
Add a photo to this gallery