A throw with a large shuriken star.

Shuriken[1] (手裏剣, Shuriken[1]?) is a Speed Formation maneuver and a Solo Attack used by Espio the Chameleon on Team Chaotix in Sonic Heroes. When using this technique, Espio throws a large shuriken star at his opponents.

When performing Shuriken, Espio pulls out a three-foot large, four-pointed shuriken star and throws it away like a Frisbee which can damage enemies, break Wooden Containers and open Item Boxes. This move only deals one hit worth of damage to enemies and has to be used multiple times to damage foes like Egg Pawns with rock shields and Metal Madness. However, it cannot damage heavily-armored foes like the Cameron or silver-clad Flappers.

The Shuriken can be thrown over a long range, though it will disappear in a blue flash (except on the PC version) once it reaches its maximum distance or when hitting Egg Pawns with shields. If used in close spaces, the shuriken star will ricochet off the walls repeatedly, allowing more strikes until it disappears. The Shuriken can even be used when Espio has turned invisible from using Leaf Swirl. Using the Shuriken successfully also slightly fills up the Team Blast Gauge.

To perform Shuriken in gameplay, Team Chaotix must be in Speed Formation. The player then has to hold down the action button (

) and release it without any teammates nearby to launch the Shuriken. However, the thrown shuriken star does not home onto enemies automatically, so the player has to aim manually before using the ability. An easier way to perform this move is by using it while Leaf Swirl is active, as no teammates will be following Espio during that time. 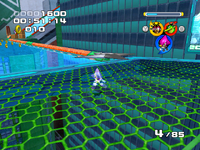