The Shrine of Knuckles's race in the present day, from Sonic Adventure DX: Director's Cut.

The Shrine of Knuckles's race, also called the Mystic Temple,[1] is a landmark that appears in the Sonic the Hedgehog series. It is a large shrine deep within the jungle of the Mystic Ruins and one of the few remnants left of the once-great Knuckles Clan empire after Perfect Chaos laid it to waste. Now an abandoned relic in the Mystic Ruins, its site has since been named the Ancient ruins.

The shrine is pyramid-like structure consisting of four thick platforms stacked on top of one another and a staircase on each side leading up to the upper levels. The shrine features two entrances on the top level on the front and back, with the door openings in the shape of a serpent's head. Inside the shrine is an abandoned subterranean world, dubbed the Lost World, which consist of a labyrinth of passages, large water streams, secret inflamed traps, mystical machines like the Lit Panel, switches that determine the water level of rooms, moving snake-shaped panels, darken rooms with bottomless pits, and a system of light reflection-based puzzles.

At the height of the Knuckles Clan's civilization, the shrine had sculptures with murals of serpents along its staircases and red outlines adorning the outside. In the present day, the shrine is seemingly smaller (possibly having sunk partially into the ground), duller in color, and some of the serpent-mural statues have been replaced by echidna statues. One of the entrances to the shrine could also only be opened by switches incorporating the gold and silver statues.

In Sonic Adventure, 3,000 years after the first Chaos incident, the shrine had become a nearly forgotten place among the Mystic Ruins and a place of interest for many human archaeologists. When Dr. Eggman unleashed Chaos, Knuckles the Echidna and Sonic the Hedgehog found and entered the shrine, but for different reasons: Knuckles was looking for the lost Master Emerald Shards inside, while Sonic was taken there by Tikal's spirit to learn more about Perfect Chaos.

In the anime series Sonic X, the shrine has a much less detailed and more blocky design, with a giant tree growing on top of it. It originally resided on Sonic's world until its landmass got transported to Earth due to a large-scale Chaos Control. When Dr. Eggman let Chaos loose, Tikal took Sonic to the shrine to reveal more about Chaos' past and the threat he posed. 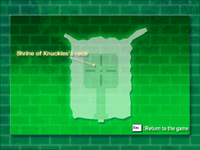 Map of the Mystic Ruins with the Shrine of Knuckles' race 4,000 years ago. 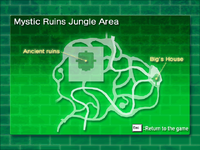 A present-day map of the Mystic Ruins with the Shrine of Knuckles' race, now named "Ancient ruins".