The Shovel Claws, from Sonic Adventure 2.

The Shovel Claws are a pair of hooked metal plates with spiked claws that can be attached over the tops of Knuckles' gloves. They are specifically made to enhance Knuckles' digging abilities, allowing him to use Dig. Rouge the Bat's equivalent are Pick Nails.

In Sonic Adventure, the Shovel Claws are located in Mystic Ruins. They are found in a small cave behind Tails' workshop, inside one of the smaller cavers with a Kiki Badnik, close to the Mine Cart that takes players to the Mystic Ruins' Chao Garden. After getting trapped inside the room with the Shovel Claws by a cage door activated by a Kiki, Knuckles has to use the Shovel Claws to find a hidden contact to break free. It is a later requirement to find the Master Emerald shards in certain levels.

In Sonic Adventure 2, Knuckles finds them in Pumpkin Hill, on a platform just in front of the starting point of the level. They are the only mandatory Level Up Item for Knuckles in this stage, as at least one of the Emerald Shards in the level will be hidden underground, requiring the Level Up Item to get to it.

In the anime series Sonic X, the Shovel Claws originate from Knuckles the Echidna's home world. After somehow ending up on Earth, they were found by Hawk, who later returned them to Knuckles. Knuckles would afterwards used them on a few occasions, mainly for burrowing and combat. 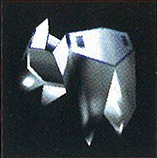 Sonic Adventure 2
Add a photo to this gallery