Shortfuse from Sonic the Comic #85. Art by Roberto Corona and colouring by John M. Burns.

Shortfuse the Cybernik, originally Shorty the Squirrel, is a character that appears in the Sonic the Comic series published by Fleetway Editions. He is a Badnik character, who manages to regain his own self-awareness and declares his own personal war on Robotnik. His armor is made of Megatal, an indestructible material.

Shortfuse has a silver body with red-and-black-striped gauntlets and shoulder pads, and black eyes with red pupils.

Originally an idealistic, short tempered young anthropomorphic squirrel, Shorty's life was changed when his friends and neighbors (including his best friend, Hopper) were captured to be turned into Badniks. Shorty attempted to rescue them single-handedly, damaging some equipment in the process, but was captured by Doctor Robotnik. Robotnik decided to use Shorty as the organic battery for Robotnik's prototype new Super-Badnik - the Cybernik, a process that meant Shorty would never be freed from the armour.[1]

However, a combination of the damaged equipment and Shorty's stubborn personality allowed him to resist his Badnik programming.[2] Renaming himself Shortfuse, he decided to use his powers to fight against Robotnik in revenge for trapping him in the suit. From this point on Shortfuse decided to battle alone, declining Sonic's offer to join the Freedom Fighters.[3]

Nevertheless, he did occasionally work alongside the Freedom Fighters, assisting them against foes such as the giant Mekanik[4] and Commander Brutus.[5] He once battled Knuckles over a misunderstanding[6] and, on a separate occasion, was temporarily brainwashed by Robotnik into fighting Sonic, although he managed to recover his wits and continue his one-squirrel war on Robotnik.[7]

During one particular solo endeavor, Shortfuse managed to free Tekno the Canary,[8] a former weapons designer for Robotnik (and creator of Megatal). Tekno redesigned his armour and built a bomb,[9] which they used to blow up one of Robotnik's factories in the Chemical Plant Zone.[10] The two became close friends and allies.

During the time Sonic spent trapped in the Special Zone, Shortfuse joined the Freedom Fighters to provide the muscle and psychological boost that the group needed.[11] However, his short temper and hot-headed attitude frequently put him at odds with the team, particularly Amy Rose, who was then the team leader.[12] In this time he also encountered another Cybernik, a rat named Vermin who had volunteered for the procedure and who was loyal to Robotnik.[13] After Vermin temporarily infected him with a computer virus that shut down his systems, Shortfuse developed an intense rivalry with Vermin,[14] eventually even leaving Johnny Lightfoot in danger in order to fight Vermin. This led to an argument between Shortfuse, who claimed the mission should take priority, and Amy, who said their mission was to save lives. As a consequence, Shortfuse left the Freedom Fighters, insisting on doing things his own way.[15] He later reconciled with them.

When the Black Asteroid exploded, causing an electromagnetic pulse that wiped out all of the computers on Mobius,[16] Shortfuse was flying over the Lava Loch Zone. The pulse knocked his armour's power offline and he fell into the boiling lava, but his life was saved by his backup life-support systems and his indestructible armour. He remained in the lava for months before the power finally returned and he was able to crawl to shore. However, he found that Robotnik had already been defeated in his absence, leaving him without a purpose. He had trouble adjusting to civilian life, his Cybernik state getting him fired from job after job. When the alien Insectra Empire contacted Mobius looking for a champion to help them against their enemies, the Blurrgh, he leapt at the chance to be a hero again.[17]

Unfortunately, the alien war turned out to be a pointless, brutal waste of time and Shortfuse was brainwashed into continuing to help them by means of an alien creature called a Controla-Crawly,[18] and he became a vicious enforcer that they called the Destroyer. When Amy and Tekno were teleported to the Insectra ship,[19] they managed to free him from Insectra control. The ship was subsequently shot down[18] and crashed on the planet of a friendly alien race known as the Kaamdaarn. The Kaamdaarn's positive energy prevented any weapons from functioning on the planet, and as a result the Insectras and the Blurrgh decided to end the war and settle down in peace. Shortfuse also decided to stay, hoping that the Kaamdaarn's energy might be used to free him from his armour.[20] He returned to Mobius at Christmas with a Kaamdaarn named Amber,[21] who gave him a computer program designed by Kaamdaarn psi technology, allowing him to exit his suit for the first time. Unfortunately, on New Year's Eve a "Magnetic Ray" belonging to Party Pooper reactivated Vermin the Cybernik, and he broke free from his maximum security prison cell.[22] In order to finally defeat Vermin, Shortfuse tricked vermin into downloading his armor release program through vermin's stinger tail and then destroying his empty Cybernik armour from the inside.[23]

After a few sporadic battles (such as against Agent X and Colonel Granite), Shortfuse went into his final battle against Robotnik and his attempt to drain Mobius's life energy until the planet suffered environmental collapse. Shortfuse commandeered the alien machine Robotnik was using, stopping him from using Mobius' life energy to give himself powers, and used it to reverse all the damage the villain had done. However, the feedback proved to be too much and destroyed his suit, finally freeing him and giving him his chance to be plain old Shorty the Squirrel.

Shortfuse has powerful blasters built into his wrists and is capable of flight.

Being encased in badnik armor means that Shortfuse is unable to eat food. Instead, he absorbs solar energy through receivers in his shoulder pads.[7] It is implied that his bodily waste is dealt with by a built-in filter system.[20] He can convert his arm into a flashlight.[24] 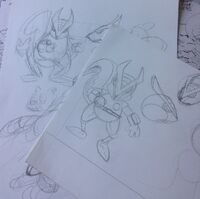 A schematic of Shortfuse's armour, from Sonic Holiday Special (1996). Art by William Potter. 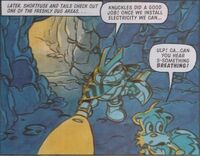 Shortfuse and Tails exploring underground tunnels, from Sonic the Comic #94.