Sonic News Network
Register
Don't have an account?
Sign In
in: Rings, Sonic and the Secret Rings

Shahra's Ring, from Sonic and the Secret Rings.

A golden ring which Sonic wears on his finger. It bears an inscription that bestows good luck upon its wearer.

Shahra's Ring,[1] also known simply as the Ring,[2] is an object that appears in the Sonic the Hedgehog series. It is the ring belonging to Shahra, the genie of the ring, and which is used by her masters to give her commands.

Once Sonic the Hedgehog placed the Ring it on his finger, he met Shahra, who requested his help. Shahra's Ring has a unique ability to grant as many wishes as the wielder desires–however, the wishes are not very powerful compared to that of a lamp-genie's. The Ring displays an inscription on its surface that calls for good luck upon its wearer.[1] 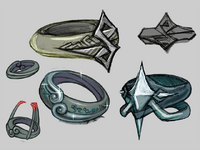 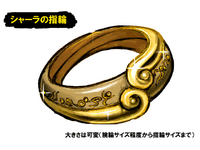