The main menu of the U.S. version of Shadow the Hedgehog Flash.

Race Shadow to the end of the level while destroying enemies and collecting Rings on the way. Try for the high score!

The player controls Shadow the Hedgehog in a 2D Westopolis. The objective is to reach the Goal Ring at the end of the level whilst collecting Rings, platforming and defeating enemies. There are various Springs and platforms the player can use to avoid bottomless pits and navigate the level. Containers also appear, but only as obstacles that Shadow has to jump over. The player encounters enemies from the Shadow the Hedgehog game, such as GUN Soldiers and Black Warriors. Enemies can be defeated by performing a Spin Jump above them, after which they drop a weapon that can be picked up and used against other enemies. GUN Soldiers drop Pistols and Sub Machine Guns, while Black Warriors drop Light Shots and Flash Shots. All of the weapons have unlimited ammunition.

The player controls Shadow, equipped with a Sub Machine Gun as he endlessly rides his bike down the highway of Westopolis. The player’s goal is to last as long as possible to rack up the score until their limited health eventually diminishes, while dodging debris and cars, combatting incoming Black Hawks, and occasionally battling Black Tank mini-bosses. Shadow can move up, down, left or right as the bike automatically propels forward on the road.

As well as access to the game, the main menu offers several other options: 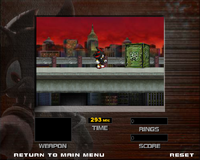 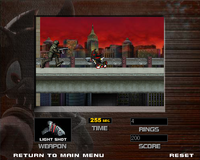