I won't hold back! Here I come!

— Shadow, before the fight.

Shadow the Hedgehog is a boss of Sonic the Hedgehog (2006), fought in the Silver Episode's storyline. He is fought after Silver completes Radical Train.

Silver once again listened to Mephiles's manipulation, and tracked Sonic down when he was carrying Princess Elise. After a brief battle, Silver paralyzed Sonic with PK, while Doctor Eggman imprisoned the princess again. As Silver prepared to finish Sonic off, Shadow appeared and broke Sonic free from Silver's psychic powers. A surprised Silver mistook Shadow as Mephiles and asked why he was interfering, but Shadow corrected him. Sonic silently thanked his rival for coming to his aid and went after Elise and Eggman, while Shadow fought Silver in a wide area in Radical Train.

At the start of the battle, the player must pick up Rings so that they are not defeated by Shadow with only a single kick. The conveyor belts that stretch across the top of the train yard are full of Rings, and the player can spy two Rings Item Boxes hanging from the underside of two loading cranes. After collecting Rings, the player should drop down to the ground level and scoop up crates and barrels with Psychokinesis, then look for Shadow and hurl the crates at him to cause damage. The player must watch out for the Chaos Spears Shadow throws at the player when they are at a distance If Shadow gets the drop on the player, they should look for additional Rings in the middle of the train yard on the ground. It is also a good idea to leave a least one Ring Capsule in the air as a backup, just in case the battle goes poorly and the player needs the Rings to survive. When Shadow starts kicking, the player should keep a safe distance in order to avoid taking damage.

When Shadow is nearly finished, he will activate his Chaos Boost which turns his Chaos Spears into Chaos Lances that will damage the player upon contact instead of paralyzing them. 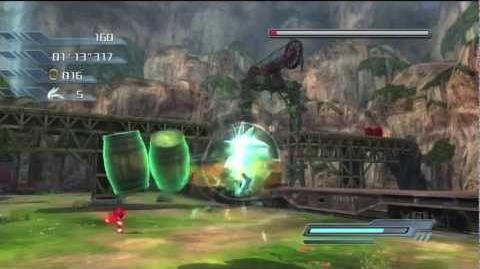