You're finally here, Sonic. I don't know where we are, nor do I care. This is where I finish you, Sonic!

This battle is fought on a looped circuit. Here, Sonic and Shadow must race each other to gain Energy Cores. During the race, Shadow will use his own version of the Boost when Sonic gets ahead of him or activate his own Boost. Should each character collide while boosting, they will ricochet to the left and right. There are certain parts of the arena where Shadow will slow down to collect Rings and maintain his boost, during which the player can hurt him with the Homing Attack or Boost. However, it is not advised to attack Shadow when he and the player are close to the Energy Core, as that may launch Shadow directly at it.

During the race, the player can pick up Rings, destroy blue-tinted Meteorites and utilize Trick Jump Panels to keep the Boost Gauge filled. During the course, should Sonic fall too far behind Shadow, Shadow will fire several damage-inducing Chaos Spears directly at him. Once either Sonic or Shadow gain two Energy Cores, they will immediately perform a special attack. If Shadow gains two Energy Cores first, he will launch several Chaos Spears onto the ground that Sonic will have to avoid using Quick Step, before launching a large Chaos Spear at Sonic (while applying Chaos Control) to throw off Sonic's timing. If Sonic gains two Energy Cores first, he will automatically use a powered-up Boost which lets him smash into purple Meteorites that will fly into Shadow, slowing him down. If Sonic can catch up to Shadow, he can ram into Shadow, eating away at his rings. In order to win the battle, the player must attack Shadow this way when he has no Rings.

In Hard Mode, both characters have to get three Energy Cores in order to perform their special attacks. Shadow also seems to be faster and more proficient in pursuing Energy Cores, taking the higher routes more often. The blue meteors and almost all Trick Jump Panels are also absent, making it harder to maintain boost.

In the Nintendo 3DS version, Shadow has three attacks: Chaos Spear, the Boost and the Homing Attack. Every time Sonic gets ahead of him, Shadow will use his Boost to catch up, which is faster than Sonic's boost and as a result it could end in Shadow running over Sonic. If Shadow is ahead of Sonic, he will start throwing him Chaos Spears and if the hedgehogs are really close to each other, Shadow will try to homing attack Sonic. Sonic can hit Shadow with either the boost, the Slide Attack or the Stomp. 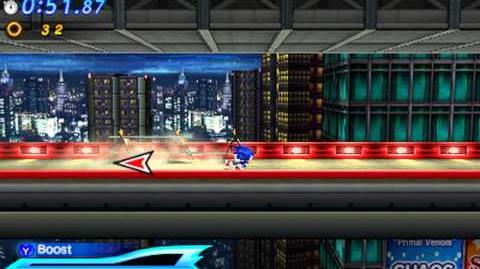