"Shadow World" is the thirty-sixth episode of the anime series, Sonic X, as well as the fourth episode in the Shadow Saga. It first aired on 7 December 2003 and 20 November 2004 in Japan and the United States respectively.

The episode starts off with a news report saying that there were no injured survivors after the destruction of Prison Island, leaving Sonic's friends relieved. Amy suspects that Shadow has transported Chris with Eggman and Sonic immediately leaves in order to search for Chris although he is still targeted by the police. The gang all proceed to look for Eggman's secret base. Meanwhile Knuckles is running through a desert and then flashes back to his recent encounter with Rouge who has stolen the Master Emerald. The ground suddenly shakes and Knuckles moves further only to discover Eggman's pyramid base.

Chris is then seen inside Space Colony ARK along with Shadow. Chris wonders if he's the first kid to have ever gone to outer space to which Shadow replies he is not. Chris notes that Sonic and Shadow look alike and asks if they were related by receives no answer except for a stare, leaving Chris scared. Staring out through the window, Shadow receives another flashback to his past: he, Maria and Gerald being chased by the GUN soldiers. Eventually Shadow is trapped inside a capsule and Maria was there, asking Shadow to fulfill her promise which were the last words before Shadow is sent to Earth in the capsule. Shadow vows to have revenge over humanity. Meanwhile Eggman, Decoe and Bocoe began to prepare the Eclipse Cannon and threatens the President that he will use it unless the population surrenders. Knuckles battles Egg Golem while Tails adapts the X-Tornado to fly into space to rescue Chris. 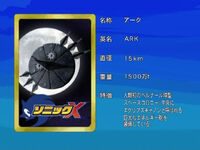 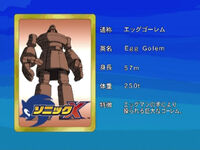