The title screen of Shadow Shoot.

Dr. Eggman has stolen a Chaos Emerald from Shadow, so the hedgehog sets out to get it back.

Shadow Shoot takes place over several automatically-scrolling levels, in which the player must guide Shadow to reach the end, collecting Rings and defeating enemies as they go. Fall down a pit or hit an enemy when having no Rings and the game is over. For attacks, Shadow can shoot things with a handgun or use the Spin Jump, which is possible to chain score combos with. At the end of each level, a boss has to be defeated. High-scores from the game can be uploaded to a scores server. 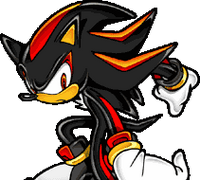