The episode opens with a helicopter flying over Station Square, with a handcuffed Sonic on-board who is escorted with GUN officers for supposedly causing trouble at Prison Island. Sonic, not wanting to be captured, breaks free from the helicopter and jumps off the plane with a spare piece of metal, landing in a skate board dome and sliding free. Throughout the main outskirts of Station Square, GUN are tracking Sonic and send some of their robots after him. Sonic runs through the streets as he escapes from the robots which destroy parts of the city with their weapons. Sonic manages to escape and hide in the sewers, wondering what GUN suspects he has done. At school, Chris is asked if he is seen Sonic up close and Chris explains a bit vaguely about Sonic before parting off.

Back in the limo, the president is informed about the status of various current affairs from Christina, mentioning their undercover operative and the flood in Station Square. When the president asks about Sonic, she responds that due to Sonic's "crime", she advises not to involve the government to which the president does not agree. He is informed that Sonic has escaped and Sam explains that Sonic is innocent, but the aid says that the government should let go of Sonic and Sam suddenly stops the car, much to Christina's dismay. Sam replies that he is just doing his job.

At a museum that night, a dark hedgehog (Shadow) is spotted breaking a glass case containing an emerald. As the robots try to stop him, he unleashes a blast of energy and destroys them all, before running off at high speed. The president is informed at the capital saying that Sonic has been seen stealing a Chaos Emerald. He orders that Sonic be taken captive and orders them to go underground to get him. Back in the apartment, Chris and the others are watching TV while the news informs about the theft and shows images of Shadow. Chris wonders if it is Sonic, but Cream says Sonic would not do such a thing. Chuck thinks otherwise, but everyone gangs up on him in disagreement. The news says that authorities have said Sonic has destroyed tanks and fled. Chris is worried, but Ella says there are explanations.

Back underground, Gun Beetles flood the sewers and all other entryways. In the sewer, some homeless people, including Jerome, are discussing about the theft and Jerome jumps to the fact that Sonic was behind the robbery when Sonic suddenly runs past the homeless men with Beetles chasing behind him. In Prison Island, Scarlet and Mister Stewart are heading onto the island. Stewart uses his connections to get into the island and Scarlet wonders who Stewart really is, but he does not disclose anything apart from a fellow newsholder. Inside, the two interview the warden, and he shows some camera footage of Shadow and Eggman attacking the robots as they think the new hedgehog is not the Project Shadow file.

In the city, Sonic escapes the sewer with Beetles pouring after him. Suddenly one of the larger robots appears and Sonic holds up a Ring, dodging the shots that are being fired at him. He goes into a spin attack, but misses the robot and runs to escape as the robot fires missiles at him. Sonic manages to make the missiles hit and destroy the robot. Just then there is a flash of light. Shadow appears and greets him. Sonic realizes that it is Shadow that has framed him and as he goes to attack, his doppelganger disappears. Stuart meanwhile figures that the hedgehog he is looking at is not Sonic. Up on the roof, the mysterious hedgehog says he is not the impostor, but the real thing. Sonic goes up onto the building, but the hedgehog goes to another building and Sonic challenges him to a race.

The two race while Chuck gets a call from his son that Sonic is battling a robot. Chris, Chuck, and Mr. Tanaka drove to follow him. Sonic and Shadow are busy racing while Sonic tries to pull the lead and the two keep up their speed. Chris and the others catch up with Sonic as Shadow hits him from behind. Meanwhile, Eggman observes the hedgehogs' fight and has a flashback recalling his first encounter with Shadow back at Prison Island. When Shadow first woke up, Eggman mistook him as Sonic, but Shadow corrects him and pledges his loyalty to Eggman. Just then, a Hot Shot appears and Shadow easily destroys the robot. Back in the present, Eggman hopes that Shadow will defeat Sonic. Shadow holds up a Chaos Emerald and Sonic demands he hand over the emerald and speeds towards Shadow but Shadow disappears before Sonic can get to him. Shadow uses Chaos Control and Sonic wonders how Shadow can do it with one emerald. The two start fighting but Sonic is easily defeated when Shadow knocks him down, besting him.

Shadow states he was not using his full power and that Gerald Robotnik gave him the power of Chaos Control, deeming Sonic inferior to him. Just then, as sirens approach towards them, Shadow disappears as the cops and GUN arrive, surrounding Sonic with their cruisers and Beetles. Sonic is ordered to put his hands up, but Sonic protests, saying he did not do anything. When Chris pleads with Sonic to turn himself in, Sonic surrenders himself willingly to the authorities. Sonic thinks that despite Shadow's Chaos Control, the former will get out without tricks and expects to encounter Shadow again.

Sonic is taken away while Shadow says he will not let anyone stand in his way, especially Sonic, but then thinks about Maria. At the base, Eggman throws a party and congratulates Shadow on doing his job. Shadow says Eggman needs more emeralds in order to use the Eclipse Cannon, being able to conquer the world with it. Bokkun appears with a message with Rouge on it saying they need to talk together. Bocoe and Decoe advised not to trust her but Eggman orders them to get her, only to have the television bomb exploding on him. Rouge appears and shows Eggman the Chaos Emerald. Rouge says she'll hand it over if Eggman lets her work with them. Eggman wonders what Rouge wants while Shadow has flashbacks about Maria. Rouge asks the black hedgehog his name while he turns and responds with "Shadow the Hedgehog", alarming Rouge.

Back on the land, Chris and Tanaka head out in disguises on a boat towards Prison Island while Tails and Amy fly overhead in the X Tornado. In an underwater prison cell of Prison Island, Sonic reflects on the events that transpired in the episode. 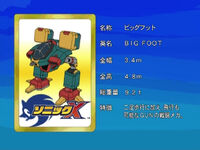 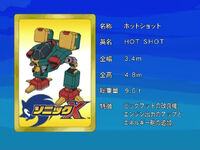