The Shadow Boss Attack option in the Episode Select menu.

A DLC level for Shadow which requires the player to defeat all the bosses and/or enemies.

Shadow Boss Attack is a boss attack stage in Sonic the Hedgehog (2006). It is one of the downloadable levels in the game and was released on 20 March 2007 for Xbox 360 on the Xbox Live Marketplace in all regions[1] while the PlayStation 3 version version was released on the same date in Asia, and in European and PAL regions on 29 November 2007.[2]

The first section of the level is the battle against the Egg-Cerberus where the fight is slightly harder than before; for the presence of enemies that spawn in the arena where defeating them is optional and the Egg-Cerberus being generally more rebelious. Enemies that spawn here include Egg Gunners and Egg Stingers. The player can use the Pulley and jump off it to defeat enemies standing on the elevated platforms located here or acquire Ring Bonus Item Boxes since they are the only source of Rings in this section. The Egg-Ceberus' attack behavior is slightly different in this level, being able to shake Shadow off even if he grabs onto the antenna for the first time. Once the Egg-Ceberus is defeated, the player proceeds to the next section.

The second section of the level is an enemy wave attack and it takes place in Soleanna Forest. After a wave of enemies is destroyed, the next group of enemies will spawn. The arena in this section has a simple flat layout with towering block platforms which can be reached with Wide Springs. Some enemies will be located on these platforms. There are four Buggy vehicles placed separately around the arena that the player may use to help them. Enemies that spawn here include Egg Gunners, Egg Stingers, the Gunner variants of the Egg Busters, Egg Lancer Egg Keepers, Egg Liners, Egg Rounders, Egg Sweepers, Egg Guardians, Egg Keepers, Egg Busters and Egg Flyers. Once all enemies are defeated, the player is able to proceed to the next section.

The next section takes place in the future timeline where Iblis in his second phase awaits. The arena now spawns less Rings on the platforms although the player can use the Iblis Takers that spawn in this stage as Homing Attack targets to reach Ring Bonus Item Boxes. Attack-pattern wise, Iblis behaves slightly different compared to the original fight (utilizing its final attack it used to do once in normal boss battle twice in this boss battle), but otherwise uses the same attacks. Once Iblis is defeated, the player can move onto the next section.

The next battle is against Mephiles Phase 1. Like the regular boss fight there are no additional enemies except the player only needs to fight the first half of the battle (the second half of the battle where E-123 Omega takes over in the fight is omitted in this level) and there are large fiery craters on the ground. The player proceeds to the next section once Mephiles is defeated.

The next section is an enemy wave attack takes place in the same area where Sonic the Hedgehog would normally fight the Egg-Wyvern, although the arena has been modified for this level; a square-border shaped aerial platform appears around the main platform. In addition to every enemy from the second section of the level, the Egg Searchers and Egg Hunters will also spawn here. Once all enemies are defeated, the player can progress to the next section.

In the next section, the player simply battles against Silver the Hedgehog without any additional enemies and his attack pattern remains unchanged from the regular boss fight, although Silver tends to run after the player more than before. Once Silver is defeated, the player can move on to the next section.

The enemy attack wave in this section of the level takes place at the same location where Sonic would normally fight his version of the Egg-Ceberus. However, the layout has being altered slightly in this level; there are considerably more destructible walls and statues placed in the arena. The fallen ruins in the center also form a pathway the player must follow which contain more enemies along the way. Also, instead of Dr. Eggman's robots, the player fights Iblis's Minions as the enemies, namely the Iblis Biters, Iblis Takers, Gazers, Golems, Iblis Worms, Stalkers and Titans. Once all enemies are defeated, the player is able to proceed to the next section.

In this section, there is a Bike that the player can use to raid on the enemies and for easier navigation.

In the last section of the level, the player battles against the second phase of Mephiles. Just like the original boss fight, there are no additional enemies. Defeating Mephiles here will end the level.

The banner of Shadow Boss Attack used in the Xbox Live Marketplace. 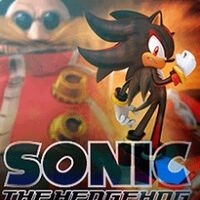 The banner of Shadow Boss Attack used in the PlayStation Store.