Shadow Basketball is a LCD handheld game by Fisher-Price that was released as a McDonald's Happy Meal giveaway toy, offered for a limited time in 2004 in the U.S. and in 2005 in Europe.

Very similar to Shadow and Omega Hockey, Shadow Basketball allows the player to take control of Shadow as he throws basketballs into a basketball hoop. The only challenge to the game are the defenders, who take the appearance of Omega, who move between the three spaces in an attempt to block. By scoring enough points, the player can advance to the next level, where the defenders' speeds are increased, or the addition of a second defender. If the defenders manage to block the ball enough times, the game ends. 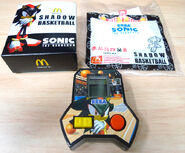 Packaging
Add a photo to this gallery
Sonic the Hedgehog LCD games
Retrieved from "https://sonic.fandom.com/wiki/Shadow_Basketball?oldid=2205484"
Community content is available under CC-BY-SA unless otherwise noted.