There's no time to play games. You won't even get the chance!

In the first battle, the player must watch Shadow's moves closely. When he is near, he will perform a Homing Attack which may catch the player. However, the player can dodge Shadow's Homing Attack by performing a Somersault. If the player times the Somersault perfectly, it can also be used to attack Shadow. The easiest way to beat Shadow is to wait until he stops moving and then Spin Dash at him quickly. The player must hit him three times to win the battle. 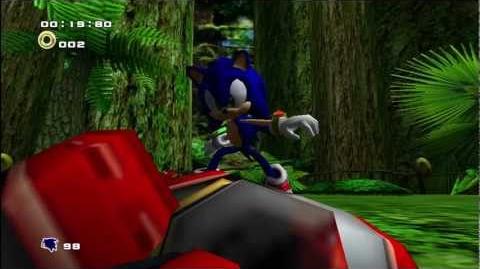 Before this is over, I'll show you the true power of CHAOS CONTROL!

Shadow is now stronger than in the previous battle. The player must now race Shadow along an infinite line of platforms that fall into a bottomless pit one after another behind Sonic.

At the beginning, the player must launch a Homing Attack or Spin Dash at Shadow to hurt him. If the player takes the lead in this race, Shadow will teleport in front using Chaos Control or launch a Homing Attack at Sonic to hurt him and take the lead. To avoid the latter, the player simply has to use the Spin Jump. As an alternative, the player can deflect Shadow's Homing Attack by charging a Spin Dash. After the player has hit Shadow three times, he will begin to use new special attacks. The player must now get behind him and wait until he stops to use his Chaos Spear, and then attack him before he can fire it. His Chaos Spears can be avoided by Spin Dashing, changing directions, or Somersaulting. Continue this pattern until Shadow is defeated. Alternatively, the Light Speed Dash can also damage Shadow, should he teleport into a trail of Rings.

If ten minutes has elapsed , the road ahead will collapse with further sections falling down just as they appear. While Shadow stays safe thanks to Chaos Control, the player will eventually die after hitting the death line. 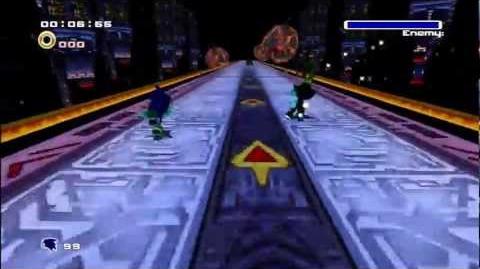