Shade the Echidna, from Sonic Chronicles: The Dark Brotherhood.

Shade the Echidna (シェイド・ザ・エキドゥナ, Sheido za Ekiduna?) is a character from Sonic Chronicles: The Dark Brotherhood. As the lead member of the Marauder forces, she takes her job very seriously and serves to please her lord. She has lived with others of her lost clan within the Twilight Cage for over 4,000 years (from the perspective of Sonic's world).

Shade is an anthropomorphic echidna with orange fur, a peach muzzle, and lilac eyes rimmed by a patch of much lighter (almost white) fur, each with a single, short eyelash which curves off to the side.

She has seven dreadlocks with a lighter zigzag pattern near the ends hanging from around her head, noticeably shorter than Knuckles', which may be caused by her headband, and a small, black nose and zigzag tail, akin to that sported by Knuckles and Tikal.

Before the events of the game, Shade assisted in the capture of the final Chaos Emerald and took Knuckles the Echidna prisoner while doing so, nearly able to overwhelm him on her own. She makes her first appearance in the Blue Ridge Zone, revealing herself and the Marauders as echidnas of the Nocturnus Clan. Upon being defeated in combat, she tried to stop Sonic and friends from entering Metropolis by causing an avalanche.

After she believes to have fulfilled her duty of stopping Sonic, she goes to Angel Island and meets up with Imperator Ix, unaware that the team made use of an alternate route constructed by Dr. Eggman. While on the island, Sonic and Knuckles confront her and Ix, and Ix reveals his plan and true intentions to the heroes. After she discovers Ix's plan to conquer Sonic's world, Ix attempts to kill Shade, who is saved by Knuckles.

Shade then becomes Sonic's ally for the rest of the game. She joins with Sonic and friends only because she wanted to bring the Nocturnus Clan back to Sonic's world - not to take over it as well (Ix's goal). She also says that she's impressed by the courage and strength of Sonic and Knuckles, and that she's hard to impress.

Soon, Shade forms a team with Knuckles on the Nocturne in an attempt to return the Nocturnus Clan to Sonic's world, but fail when they are drawn into battle by Imperator Ix. After Super Ix is defeated at the hands of Super Sonic, she flees in the Cyclone with Sonic and his friends, making her the only Nocturnus Clan echidna to permanently escape the Twilight Cage into Sonic's world.

Shade is a tough, disciplined, and somewhat noble figure. She is very loyal and is not afraid to stand up for what she believes is right. Trained in the arts of stealth and the use of powerful, high-tech weaponry, Shade is a deadly force in combat.

As a former denizen of the Twilight Cage and high-ranking officer of the Nocturnus Clan, she is very knowledgeable about the races and places of that alternate dimension, and she is willing to help the team by telling them what she knows of Ix's secrets.

She is quite impressed with both Sonic and Knuckles, and she fights alongside them to redeem herself for unknowingly contributing to Ix's plans for world domination.

Having been trained under the Nocturnus Military, Shade is a disciplined and powerful fighter. Even her clan's leader, Imperator Ix, holds her skills in high regards and acknowledges her as his finest warrior. Another testament to Shade's abilities is that she has proven herself capable of completing even the toughest missions she was given and without flinching.

As both the agent and spy of the Nocturnus Clan's military, Shade is trained in the arts of stealth and infiltration, and is shown to especially excel on the subject, capable of sneaking through or behind even the toughest of enemies without bringing any attention to herself. Through her military training, Shade also possesses agility and speed to keep up with Sonic and the cast, and has high physical strength to match it.

Shade is also very intelligent, though she is far from being a genius. As a high-ranking military commander, Shade is a very calculating strategist and can quickly determine the best course of action during missions. As an example, when she and her group confronted Sonic and his team in the Blue Ridge Zone and failed their original goal to kill them there, she triggered a rock slide as she withdrew that blocked the path to Metropolis, thus keeping Sonic and his team from advancing. Shade also has vast knowledge and understanding of the Nocturne Clan's operations and machinery, as well as the races and colonies within the Twilight Cage.

Like Knuckles, Shade is a capable climber and can climb any kind of walls, no matter what material they are made of.

When forced into direct combat, Shade relies on trickery and the technology in her arsenal to win her battles. With her equipment, Shade is can hold her own in a fight and is a deadly force in combat. To best put her fighting skills into perspective, she was able to defeat Knuckles in combat almost on her own, though her victory could be downplayed given that Knuckles was worn down from fighting other Nocturnus Clan soldiers beforehand.

Shade is highly trained in the use of the Nocturnus Clan's powerful high-tech weaponry. As with the other soldiers in the Nocturnus Clan, Shade's equipment focuses on improving her chances on her missions, be it either for stealth or for combat. When carrying out her missions, Shade has proven to use her various equipment with great efficiency and utilize their effects to the fullest.

Through usage of her suit's stealth features to improve her already impressive stealth abilities, Shade can literally pass by enemy eyes unnoticed and slip through major obstacles.

Shade's weapon of choice is the Nocturnus Clan's trademark weapons, the Leech Blades. They are a pair of blades made of pink energy that is created from Shade's wristbands and can leech off the opponent's life energy to replenish her own vitality. Shade is noted to wield the Leech Blades with great proficiency and machine-like precision.

Though not displayed very much, Shade is shown carrying and use explosives. She is shown using a black-yellow grenade as part of her and Knuckles' Echidna Rush that not only creates a diversion, but also damages her opponent.

Like all the others in the Nocturnus Clan, Shade wears a Warp Belt. This advanced piece of technology allows Shade to briefly escape from the Twilight Cage and to teleport short distances.

When Shade first revealed herself as an echidna, she left Knuckles shocked, because he thought that he was the last of his kind. But afterwards, Shade gets along well with Knuckles, as he seems to care for her. For example, he saved Shade from falling from a height due to Imperator Ix. She is also concerned for his own safety. When Team Sonic landed on Voxai Colony Beta, Shade warned him of the Voxai's mind powers. Shade and Knuckles also have many POW moves together in the game.

Shade originally held much respect for Lord Ix, but once she found out his true motives, she abandoned him for using her people for his own benefits. Even after denouncing Ix's evil motives, she still holds some respect for his power as a leader.

Shade has a certain respect for Sonic the Hedgehog after he stood up against Ix and was interested in cooperating with him because she thought him a loyal hero. Interestingly, when the team had to split up into multiple squads during the assault against the Nocturnes, Shade said that she wanted to be with Sonic.

Amy Rose is initially hostile towards Shade because she thought Shade was getting too close to Sonic. But as time progresses in their mission, Amy eventually accepts Shade as their teammate.

Main articles: Shade the Echidna (Archie) and Shade (In Another Time, In Another Place)

In the Sonic the Hedgehog comic series and its spin-offs published by Archie Comics, an alternate version of Shade made a short appearance during the comics' adaptation of the prologue to Sonic Chronicles: The Dark Brotherhood. She would later become a part of the comics' main storyline with the implementation of the Nocturnus Clan, although she never made more than a single cameo appearance. 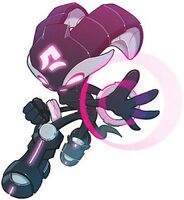 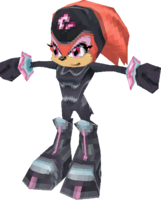