Curien Mansion (The House of the Dead)

Sewer Scrapes is a racetrack that appears in Sonic & Sega All-Stars Racing. It is one of three tracks in the game that are based off Curien Mansion, as well as the first course in the Horror Cup.

Early in the course, racers come into contact with a triple-headed sewer dragon. It is easily identified by its set of heads rising from the center of a huge pit. The player can veer either to the left or the right, but either way the racer deals with his heads. The monstrous creature will put his jaw into the attack, laying a head across the path that will slow the player down should he/she bump into it. Fortunately, racers can generally avoid any issues by drifting around the gradually curving track as it skirts the huge pit.

Slimy green water fills the canals that the rivals race through. The player will often receive items without even really trying by just sticking to the water, though sometimes it doesn't hurt to give chase if the items are floating the wrong way. Besides avoiding the dragon or racing in shallow canals, there are some dirt paths that are perfect for drifting and boosting, as well as a ramp that will send the player flying over a wide stream of green ooze.

For Curien Mansion-located tracks, such as Sewer Scrapes, these are the following tracks selectable for the course: 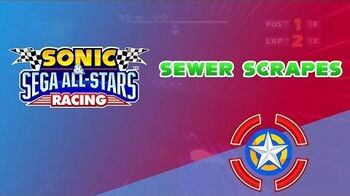