You may be looking for Seven Rings In Hand.

Seven Rings In Hand: Sonic and the Secret Rings Original Sound Track (ソニックと秘密のリング オリジナルサウンドトラック, Sonikku to Himitsu no Ringu Orijinaru Saundotorakku?), is the two disc (audio CD) original soundtrack of Sonic and the Secret Rings. It was exclusively released in Sega Direct stores, which are only located in Japan. It was released on 15 March 2007 and has a total running time of 98 minutes.

Steve Conte provides the vocals for the two main theme songs of the game, "Seven Rings in Hand" and "Worth a Chance", while a majority of the other vocal songs are performed by Runblebee.

Seven Rings In Hand is the main theme song of the game. It was written by Runblebee and performed by Steve Conte. The song is primarily used as the final boss battle song, but it is heard in many other places such as the main screen and the results screen.

This marked the third time that Runblebee had created a main theme for a Sonic The Hedgehog related game, the first being Sonic Speed Riders, and the second being Catch Me If You Can, both from Sonic Riders.

The soundtrack version has an extra verse at the end, whereas the version in the game loops back to the beginning before the final verse is sung.

Also performed by Steve Conte, this is the song used in the final end credits of the game. In a somewhat similar tone to the end theme of Sonic the Hedgehog (2006)'s "My Destiny", it is a much slower and softer theme in comparison to the rest of the songs in the game.

An early demo version of the song is featured on Disc 2.

The Treasure Disc is also an enhanced CD that can be placed in a computer to access some hidden media. This includes files that can be printed out to created a book cover that looks like the book from the game, wallpapers and sound files for your PC, a movie of the game's trailer, a digital recreation of the soundtrack's booklet, a large image of the game's poster, and also another printout to make a Sonic cutout. 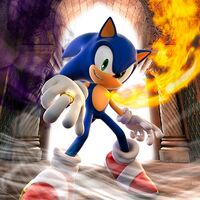 Digital volume cover, raw.
Add a photo to this gallery