Sega Superstars Tennis is a tennis game and the second title in the Sega Superstars crossover series. It is also the first in the series developed by Sumo Digital, crossing over numerous Sega franchises, including Sonic the Hedgehog, Alex Kidd, Space Channel 5 and 12 more. It was released in March 2008. In 2013, Sega and Feral Interactive announced that the game was available for the Mac on its following summer along with Sonic & Sega All-Stars Racing. The Mac version of Sega Superstars Tennis features online multiplayer by using Game Center.

There are several playable minigames in Sega Superstars Tennis, including ones from Sega games such as a House of the Dead meets Space Invaders game, in which the player has to hit moving targets in the form of zombies, a Space Harrier game, a Puyo Puyo game, and a Virtua Cop game.

Each character has their own unique special attack giving the player more chance of scoring a point. For example: Gilius throws a magic bottle in the air and covers the opponent's side with thunderbolts, if they touch one the character will be stunned for a brief moment, or Sonic's signature "Super Sonic" attack, which causes the tennis ball to zig-zag in various directions around the court when he hits the ball.

The PlayStation 3 and Xbox 360 versions both have online play, while the Wii version has three different control schemes (motion control, Wii Remote sideways, and Wii Remote with Nunchuk). The Nintendo DS version of the game can be played with

, or utilize the stylus. Between the HD version and the Wii version visual-wise, the models in the latter are of low quality, making the spectators' limbs jagged (mostly Silver and Blaze's). The lighting on the models overall, including the models, especially when doing special poses, are likewise very poor. Also, whereas the shot balls have yellow trails on the HD version, the shot balls on the Wii version display specific trails (yellow, blue, green) depending on its power.

There are two courts featured in this game from the Sonic the Hedgehog series, both originating from the first game.

Green Hill Zone: Green Hill was fitted with a tennis court with various characters making cameo appearances around the field, mainly Chao, but also Blaze the Cat, Silver the Hedgehog, Knuckles the Echidna and Big the Cat. This is where many missions in Sonic's world in Superstar Mode take place, including a singles tournament with various Sonic characters. The court features four unlockable music tracks of levels from previous Sonic games: Seaside Hill, Ocean Palace, a System Screen Select and Green Hill Zone.

Scrap Brain Zone: Having not used this place for about 15 years there is no reason for Eggman not to turn his old fortress into a tennis court. On one the side of the court is the machine Eggman used as the final boss from Final Zone, still moving up and down. Spectating from the sideline is Metal Sonic and the Egg Gunners from Sonic the Hedgehog (2006). This is also the location of many of the missions in Superstar mode. In these missions, Egg Gunners fire at the player while the goal is to collect rings and avoid bombs. There are a number of unlockable music tracks for this court from different Sonic games, such as from Final Fortress, Bullet Station, Egg Fleet, and Scrap Brain Zone.

These are the achievements for the Xbox 360 version of Sega Superstars Tennis: 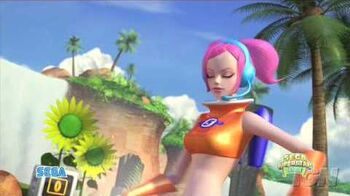 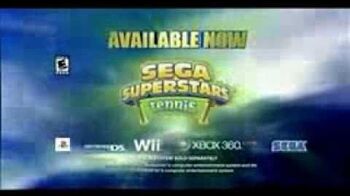 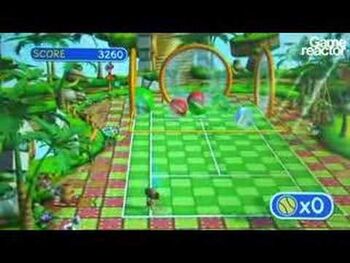