Sega Splash! Golf is a Japanese PC game announced in 2007 and released in 2008. It was not considered for localization.

Sega Splash! Golf stars two anime-styled humans named Rush (male) and Miel (female) who set out to become professional golfers. Sonic the Hedgehog is given the "with" credit in this game as he is present throughout the game as a personal coach and caddie. Other optional caddies are available such as Tails, Ulala, the Puyos, NiGHTS and others from SEGA franchises.

Fashioned as the typical mascot golf venture, Sega Splash! Golf offers appealing new features such as eight-player online multiplayer matches. There is also an Online lobby which allows up to fifty people to chat. You can have Sonic (or a different optional SEGA character) as your caddie. As you progress, so does your caddie’s expertise; they'll begin to give you more detailed and precise advice for the best shot possible. Players also have the option to dress their character in a variety of different outfits. However, if your character is not fond of the clothes you dress them in, it will affect their performance on the golf course.

There are a number of courses themed after Sega franchises. The Sonic the Hedgehog course looks very similar to Green Hill Zone with checkered hills, bright green grass and floating Rings. There are also crates on the course taken from Sonic Adventure 2. 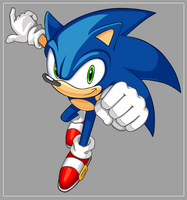 Sonic the Hedgehog
Add a photo to this gallery