For other games with the same name, see Sega Smash Pack.

Sega Smash Pack is a game compilation consisting of video games from Sega originally released for the Sega Mega Drive, including video games for the Sonic the Hedgehog series. It was published by Sega in Europe, while publisher THQ released it in North America, for the Game Boy Advance.

To promote Sega Smash Pack, Sega released a browser-based game of Sonic Spinball on the Candystand website during October 2002.[1] The top 150 scorers would then earn the right to participate in a random drawing for the game.[2] 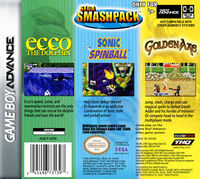 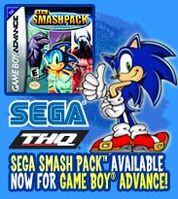