Sega Puzzle Pack is a compilation for Microsoft Windows based PCs that was released in 1999.

On 14 July 2000, a compilation titled Sega Archives from USA Vol. 2 was released in Japan for PC. It contained the same games as Sega Puzzle Pack. 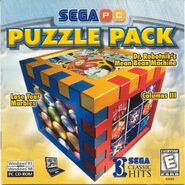 Sega Archives from USA Vol. 2
Add a photo to this gallery
Sonic the Hedgehog game compilations
Retrieved from "https://sonic.fandom.com/wiki/Sega_Puzzle_Pack?oldid=2112207"
Community content is available under CC-BY-SA unless otherwise noted.