The Sega Pico was an electronic toy by Sega. The aim of creating the Pico was to get more young children to use video game systems. The Sega Pico was designed for ages 2–8 and the slogan was "the computer that thinks it's a toy."[4] It had a total of twenty games released in the USA, two of which were of the Sonic the Hedgehog franchise. In Japan, games are still produced for this platform. 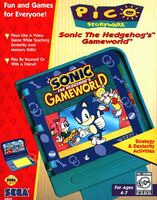 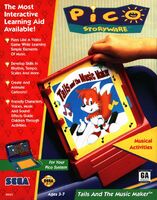 Tails and the Music Maker