You may be looking for the Sega Mega Drive.

The Sega Genesis Controller is a unique Skill that appears in the Xbox 360/Playstation 3 version of Sonic Generations. Usable to both modern and classic Sonic, it enables the player to play the original Sonic the Hedgehog. 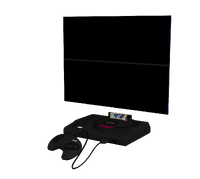