Sega Ages: Sonic the Hedgehog 2 (SEGA AGES ソニック・ザ・ヘッジホッグ2, SEGA AGES Sonikku za Hejjihoggu 2?) is a re-release of Sonic the Hedgehog 2 developed by M2. It released on 20 February 2020 as part of the Sega Ages lineup for Nintendo Switch.[1] The game was first shown on the Japanese Sega Ages website as early as 2018, but it did not receive an indication for an official release date until 2020.[2]

Other returning features include the Level Select option, the display filters and the ability to play either the Rev.01 or Rev.00 version (which the interface describes as "Japan" and "International" respectively). HD vibration is also available and is used at times like when the player uses a Spin Dash, jumps on a Spring, or destroys an Item Box. 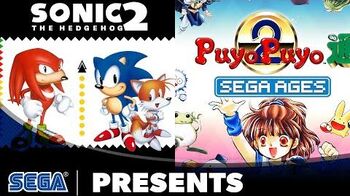