Other returning features include the Level Select option, the display filters and the ability to play either the Rev.01 or Rev.00 version (which the interface describes as "Japan" and "International" respectively). 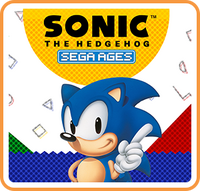