This article pertains to the beta elements from SegaSonic the Hedgehog.

The prototype of the arcade game exists as the "Revision A" version. There are numerous differences, most of which feature different level layouts, gimmicks and alternative level order.[1] Differences included: 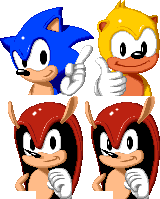 One of prototypes has the animations of Mighty and Ray appearing on the title screen, but they are not seen in-game; the final version updates them with idle animations and adds highlights to their eyes. Sonic's head was also redrawn for his finger-wagging animation, and Mighty has two copies of his title screen sprites, the latter having more highlights for his nose.

There are two sets of each of the characters' intro sprites, mostly of which feature minor shading differences. Sonic's arms are animated differently, Ray is resized and his and Mighty's faces were adjusted. Mighty is the only one whose early sprites has the "panic" expression, which is different from how they are portrayed in the final game.

There are animations of the playable characters flexing their muscles. The purpose for these sprites is unknown.

All playable characters have animations for looking up; Sonic is the only one with two directions. These animations only appear in the prototype.[2]

While the player only encounters Dr. Eggman at the end of Eggman's Tower in the final game, there are unused sprites that suggest the doctor was originally going to be more involved in the levels by using holograms for encounters, remote controls and a bomb-throwing Egg Mobile.

Egg Mobile with a bomb-throwing attachment. It should be noted that this sprite was removed from the final game and was presumably found in one of prototype's graphics data.[2]

Eggman's bomb-throwing attachment antimation
Add a photo to this gallery

There are leftover sprites of a debug menu, possibly for a level or graphic editor. 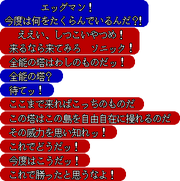 One of prototypes contain extra amount of dialogue bars with a dialoge between Sonic and Dr. Eggman. Sonic himself never talks through word balloons in the final game, so its color is otherwise unseen. Eggman talks about his "Almighty Tower" or "Tower of Omnipotence" (全能の塔). Otherwise, it is just basic trash talk.[2]

An alternate Game Over bar can be found in one of prototypes. In the final game, only Dr. Eggman appears on the Game Over text.

There are two unused bars stating "Insert more coin(s)" for Sonic and Ray which are never displayed in the final game. They could have been intended for when players had to insert multiple coins per one credit. Also, an additional bar for Mighty never shows in the attract mode HUD, as his palette is estimated.[2]

Inside the final game's code, there are alternative sprites that resemble Dr. Robotnik from Sonic the Hedgehog animated series, or Dr. Robotnik from the Sonic the Hedgehog comic series and its spin-offs (judging by Robotnik's color scheme). Much like the unused English dialogue bars, these sprites may have been intended to replace the original Eggman sprites for limited releases of the game in English territories. For full sprite sheet with unused sprites, see here.