SegaSonic Popcorn Shop (セガソニック ポップコーンショップ, SegaSonikku Poppukōn Shoppu?) is an arcade vending machine released in 1993, exclusively in Japan. Created by Sega AM1 and released by Sega on the System C2 board, hardware similar to the one on the Sega Mega Drive, it is a combination of a popcorn machine and a mini-game. The vending machine dispenses popcorn with one of three flavored toppings: butter, salt or chili.[3]

The small screen of the vending machine features a mini-game, starring Sonic and Tails, who assist in making popcorn while Dr. Eggman tries to ruin the event. While the mini-game is being played, actual popcorn is being microwaved in a nearby compartment.

For the first segment, Tails places a popcorn kettle on a treadmill which Sonic initiates, making it move right. Dr. Eggman then appears and reverses the treadmill, so Sonic grabs the kettle and runs down the treadmill while Eggman chases after him with a sledgehammer to hit him with. The player can turn the green crank to make Sonic run faster while avoiding Eggman. If Sonic gets too close to Dr. Eggman, he jumps forward to dodge the sledgehammer.

For the second segment, Sonic slides down the treadmill to a burning stove which he launches the popcorn kettle into. The player now has to turn the green crank to help Sonic stir the popcorn inside the stove.[4] The cup will eventually leap, allowing Eggman to snatch a single popcorn at a time and eat it. The real-life popcorn, however, is dispensed whether the crank is turned or not. The game ends when the popcorn is finished, upon where Tails walks off-screen to give the player a paper cup featuring Sonic and Tails, which is dispatched from the hatch of the vending machine.[1] Sonic then tells the user that the popcorn is hot as it is fresh from the oven, and that the user can come back at any time if they get hungry.

If a technical problem occurs at any point, the machine will display an error screen featuring Eggman chasing Tails as the factory explodes and the message "PLEASE ASK FOR ASSISTANCE" flashes on the screen, along with Sonic telling the user to call for a shop assistant as he chases Eggman. 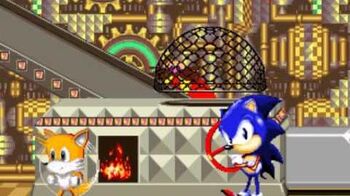