SegaSonic Cosmo Fighter[1] (セガソニック・コスモ・ファイター, SegaSonikku Kosumo Faitā?), also titled SegaSonic Cosmo Fight Galaxy Patrol,[2] is a children's ride released in March 1993 as part of Sega's "Wakuwaku" line used exclusively in Japan. Unlike most other SegaSonic titles, however, SegaSonic Cosmo Fighter received a western release, albeit incredibly limited, at Sega World Sydney in 1997, complete with an English translation.[3] The arcade ride is a shoot'em up featuring Sonic the Hedgehog in a red spaceship rescuing Animals from Dr. Robotnik in space.

Having moved his operations into space, Dr. Robotnik has begun hunting for space-faring Animals out in the cosmos. Armed with a new spaceship, it is up to Sonic the Hedgehog to hunt down Dr. Robotnik and defeat the egg-shaped scientist before the Animals are captured.[4][5][1]

SegaSonic Cosmo Fighter Galaxy Patrol is a 2D shoot'em up arcade ride viewed from a top-down perspective. The family-sized cabinet is designed like a spaceship with the feature of the cabinet shaking during the ride. The cabinet board has two buttons for weapons to fire projectiles or homing rockets and a lever labeled "SPEED UP," which tilts the entire ride. There is also a regular joystick on the left side of the board that maneuvers the ship which can also tilt the cabinet.[6]

The gameplay itself is somewhat reminiscent of of Galaga, though without rows of enemy ships along the top of the screen. Instead, either a row of ships or just one lone enemy will appear from the left of ride to attack Sonic with lasers. The player must press one of the cabinet's buttons to fire Sonic's twin laser cannon at the enemies, destroying them in just one hit.[7]

After inserting a coin, Sonic gives a speech to the player and hops into the red spaceship which gets launched from the earth's galaxy patrol station into space. Right after, Dr. Eggman appears in a small space pod to deploy bombs and obstacles at Sonic. Destroying bombs and obstacles rewards the player with stars. After arriving at the space station, Eggman will then attack with his space pod by firing projectiles or homing missiles at Sonic's spaceship after landing one of three hits. If the player defeats Eggman, he will pull back and return with a large, green space armor on his pod. The player has to destroy the homing arms of the space armor before finishing him.

If the player manages to destroy Eggman's space armor, the player is rewarded with a ship upgrade[6] and Sonic will complete his mission to save the animal friends while Eggman flies away. Depending on how well the ride has been completed, the arcade ride rewards the player with a rating from one to five stars.

Sonic's animation from the first cutscene 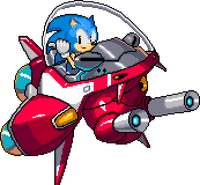 Sonic in his spaceship