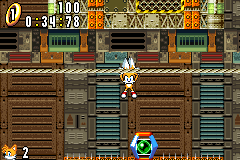 A typical factory-city installation of the Eggman Empire, this industrial setting features a host of manufacturing-based obstacles: swinging hooks to leap across the ceiling, pressurized tubes to sweep the player through a pipe network, steam tops, lava crucibles, and free-floating iron platforms. Less-usual gimmicks include zip-lines crisscrossing the foreground, and dual chutes that drop the player through the background. Many of the features in this level first debuted in Metropolis Zone from Sonic the Hedgehog 2.

A unique effect in the very first, outdoor part of Act 1 is an interesting floodlight motif, later used in Sonic Advance 2's Ice Paradise Zone. At the end of act 2, Sonic battles Eggman in the Egg Press, the Egg Mobile with a pogo-spring attached below it. It will bounce around trying to hit the player until it is almost defeated. Then it will jump off-screen at a very high altitude and will land at the player. If the player dodges it, he/she must also jump to avoid taking damage from the shaking ground the impact of the landing causes. It will then bounce around again and off screen every once in a while until defeated.

The boss is similar to the Hopping Egg Vulcan from Sleeping Egg Zone in Sonic Chaos.