The Seaside Harbor Light is a location that appears in the Sonic Boom series. It is an ancient lighthouse-like teleporter on Bygone Island that leads to the Sky Citadel.

The Seaside Harbor Light is located on a circular platform on Bygone Island's southern coast. The structure resembles a lighthouse, with a circular entrance, a Crystal Lock in front and three rows of cyan orbs adorning the bottom and top. When activated, four small pillars extends from the top and a column of light shoots into the sky. Due to being over a millennia old, it has cracks in the surface and vines growing on it.

Inside the Seaside Harbor Light is a teleporter that leads to the Sky Citadel. However, it can only take two passengers; after that, it becomes unusable.

The Seaside Harbor Light was seemingly created by the Ancients at least over a thousand years ago. 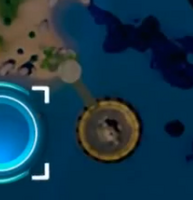 The Seaside Harbor Light on the Logbook Map.